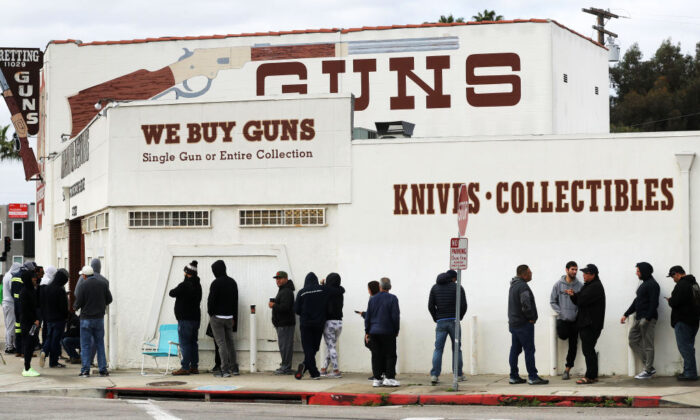 The combined events of the past year and ongoing calls for federal gun control have created ideal conditions for a massive local surge in gun and ammo sales, according to Southern California gun rights advocates.

Trent Butler, executive director of the Orange County Gun Owners (OCGO) political action committee, told The Epoch Times that civil unrest, political rhetoric, COVID-19 lockdowns, financial uncertainty, and disruptions in the supply chain have led to a spike in firearms and ammunition sales for more than a year.

“It’s a perfect storm,” Butler said. “I think people are making very complex value assessments and deciding that having a substantial ability to defend themselves … is something that’s critical to daily life.”

Butler said many of the handguns sold in the recent sales surge were revolvers and other basic models usually purchased by first-time gun buyers.

Over the past year, many customers have been looking for any pistol “they could get their hands on” and pump-action shotguns, which are “more oriented to home defense,” he said.

He added that ammo sales have also shot up, leading to stockpiling and shortages.

Not only are people buying more guns and ammo, but they’re learning how to shoot, Butler said—and one of the most noticeable trends is that more young women are taking gun-safety training classes.

Butler, an instructor at Apex Defensive Strategies Firearms Training in the city of Orange, said he often encounters students who come to his class with guns they bought after the 9/11 attacks nearly 20 years ago, but have never fired.

“That is actually a purchase motivated by fear, but it would be reductive to think that’s all there was to it,” he said.

According to a 2020 survey conducted by the National Shooting Sports Foundation (NSSF) trade association, more than 40 percent of the guns sold from January through April 2020 were purchased by first-time buyers. The survey of firearm retailers also found that 40 percent of these first-time purchasers were women.

NSSF tracks the background checks associated with the sale of firearms, based on the FBI’s National Instant Criminal Background Check System (NICS). The organization reported a record 12.1 million background checks from January through July 2020, nearly 5 million more than the same period a year earlier. According to the NSSF, the difference is first-time buyers.

Another survey taken by the NSSF revealed that gun sales for the first half of 2020 broken down by demographics showed a 58 percent increase among African American customers—the largest of any group.

“These first-time buyers represent a group of people who, until now, were agnostic regarding firearm ownership,” Keane said in a media release. “That’s rapidly changing, and these Americans are taking hold of their God-given right to keep and bear arms and protect themselves and their loved ones.”

OCGO and other gun rights groups are currently awaiting more complete information for 2020 based on 2020 data from the FBI and U.S. Department of Justice (DOJ), but Butler said early reports indicate gun and ammo sales are way up from previous years.

On Feb. 15, White House press secretary Jen Psaki told reporters that gun control is a “priority” for Biden, who is “not afraid of standing up” to the National Rifle Association (NRA), the nation’s largest gun rights lobby group. Psaki made the comments when asked about potential new gun legislation under the new administration.

“We haven’t proposed a package at this point, so it’s hard for me to make a prediction about the likelihood of passing,” Psaki said.

Gun control advocates, including many members of the Democratic Party, have long targeted the NRA as the greatest obstacle to more restrictive gun control laws.

The NRA came under fire in August 2020 when New York Attorney General Letitia James filed a lawsuit aimed to dissolve the organization. James, a Democrat, alleged during an interview with NPR that top NRA executives had stolen money from the organization’s bank accounts for decades.

Representatives for the NRA said the lawsuit was politically motivated. In a statement, NRA CEO Wayne LaPierre called the action “an affront to democracy and freedom” and “an unconstitutional, premeditated attack aiming to dismantle and destroy the NRA—the fiercest defender of America’s freedom at the ballot box for decades.”

Last month, the NRA filed for Chapter 11 bankruptcy, saying it intends to reorganize as a nonprofit in Texas.

“The move will enable long-term, sustainable growth and ensure the NRA’s continued success as the nation’s leading advocate for constitutional freedom—free from the toxic political environment of New York,” the NRA said in a statement.

Though a national debate, the subject of gun rights is playing out in Orange County politics as well, and could be a factor for some voters taking part in a local election taking place next month.

Muldoon, Moorlach, and Vo each spoke to The Epoch Times and said they supported Second Amendment rights.

Muldoon, who called himself “a strong constitutionalist,” said: “I have an amazing respect for our Founding Fathers and the wisdom that they saw in the ability to defend yourself. The Second Amendment is one of the most important amendments. It goes to personal safety, and it goes to having a right to defend ourselves against a tyrannical government that could be established in any country around the world.

“It really is something that happens, unfortunately, all too often. And I believe everyone has a right to defend themselves from tyrants.”

Moorlach told The Epoch Times that judging by the lines outside gun shops near his Orange County neighborhood, firearms sales have been “going pretty crazy” lately. He said he believes in Second Amendment rights for recreation and self-defense, but also the necessity of some limited gun laws.

“My parents lived through Nazi occupation in the Netherlands, and one of the things that Nazis did was confiscate all the firearms from the citizens,” Moorlach said. “We shouldn’t sell guns to people that are diagnosed as severely mentally ill, but everyone else should have a right to own a firearm.”

Vo, whose family endured hardships under the communist regime in Vietnam for five years before escaping to America, told The Epoch Times he opposes any move to erode or abolish gun rights.

“The right to bear arms, the Second Amendment, is the cornerstone of our independence,” he said. “When the communists took over South Vietnam, they stripped away all the people’s rights—the right to defend themselves and the right to even own property. So I know how a dictatorship government can impose and take away people’s rights. I lived through the terror.”

Vo said communist regimes especially disregard the right to bear arms. “People cannot fight back with sticks against a government that has guns.”

Foley and Rappaport didn’t immediately respond to requests by The Epoch Times for comment on the issue.

The Epoch Times also reached out to gun control advocates for comment, including Brady United and Moms Demand Action for Gun Sense in America. Representatives for the organizations didn’t respond to inquiries prior to press deadline.

As its own political action committee, OCGO isn’t officially tied to the NRA. But many OCGO members also belong to the NRA and other national, regional, and local gun rights groups, Butler said.

“When our Second Amendment rights are frankly to some degree under attack at a lot of different levels, sometimes it is best to have people at each of those levels,” he said, citing the importance of “grassroots efforts.”

OCGO has called on its members to rally behind the effort to recall California Gov. Gavin Newsom, who has signed every piece of anti-gun legislation that has crossed his desk since he was elected to office, according to Butler.

Gun rights in California have become tenuous, he said, because people hear “over and over again”—from politicians, the media, or their own social media echo chambers—that guns are “just a massive problem, and people who own guns are potentially going to do something bad.”

He said the stigma on gun ownership in California has become so bad that many people won’t admit to friends and coworkers they own firearms—even though statistically gun ownership is “at an all-time high.”

“So there’s more people owning guns, but people are afraid to talk about it because they’re afraid of what the reaction of their friends and coworkers will be. I’ve seen that time and again with students in my courses,” Butler said.

“Sometimes we’ve had people from the same company come and take a class. And all of them have owned guns for five years, they’ve worked together for five years, but nobody knew they were all gun owners before that day because nobody felt comfortable talking about it.”

Butler said now isn’t the time to remain silent about the issue. Many Americans tend to believe “if they leave other people alone, people will leave them alone,” he said.

“The last few years have certainly shown people that isn’t quite how it works. If you’re silent, you may get run over.”