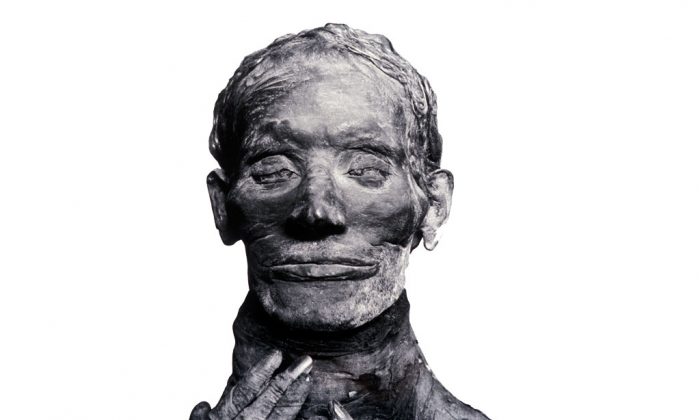 The mummy of Yuya thought by some to be Josua who, after Moses, led the Hebrews into the Promised land and logically would be the father-in-law of Amenophis III, at Cairo Museum, Egypt. (Patrick Landmann/Cairo Museum/Getty Images)
archaeology

For the first time, scientific evidence has shown that prehistoric Egyptians experimented with techniques to preserve bodies around 4000BC, some 1,500 years before artificial mummification was believed to have begun.

Traditional theories on ancient Egyptian mummification – which you will find in every book on mummies – say that in the prehistoric period, bodies were naturally desiccated (dried) by burial in the hot, dry desert sand, without any other form of human involvement.

In the journal PLOS ONE today, I – with colleagues from Macquarie, York and Oxford universities – radically revise current understanding of the origins of mummification by overturning some old assumptions.

We analysed brown, shiny residues on 6,000-year-old funerary textiles that I suspected were embalming substances. The textiles originally came from the now destroyed sites of Badari and Mostagedda in Upper Egypt. The excavators had sent these to a number of British museums in the 1920s and 1930s.

The sites consisted of clusters of small cemeteries. Some had only 50 graves, others 200, for a total of about 600. When they were excavated, it was the first glimpse of a previously unknown prehistoric civilisation, which predated anything known at the time.

I traced the textiles to the Bolton Museum in Bolton, UK, and examined them under the microscope with my colleague and award-winning microscopist Ron Oldfield. We were very fortunate to be allowed to take 92 samples back to Macquarie for textile and resin analysis, and micro and macro photography.

Only about 12 biochemical analyses of embalming substances have ever been carried out.

University of York biochemist Stephen Buckley, who has unique knowledge of ancient, aged and often degraded organic compounds from his previous work with mummies, was able to identify the embalming mixtures. This followed a number of unsuccessful attempts by other investigators.

Buckley used mass spectrometry, an analytical technique that measures the mass of compounds with very high precision and accuracy.

The chemistry showed that the toffee-like residues were actually complex “recipes”. They had not just been mixed together, but heated at high temperatures. Pine resin, plant gum or sugar, aromatic plant extract, plant wax and natural petroleum (an oil seep) were mixed into a base of fat or oil.

We’ve not yet analysed the exact source of these products – that’s for future research – but we could be reasonably expect it to be a base of something along the lines of linseed oil mixed with animal fat, such as that from hippopotamus or gazelle.

The plant gum could be acacia (also known as gum arabic) and the plant wax is most likely a cereal leaf wax, such as emmer wheat.

The most surprising and probably most sensational finding was that there was no fundamental change in the recipe of the embalming mixtures used when pharaonic mummification was at its peak, some 2,500 to 3,000 years later!

The only differences lay in the introduction or substitution of an ingredient, according to availability or to changing religious beliefs.

How to Mummify a Body

“True” or artificial mummification as practised in the pharaonic period from about 2500BC, involves:

In all techniques used in artificial mummification, the scientific basis rested on the dehydration of soft tissues to prevent decay caused by bacteria.

But, as it turns out, prehistoric burials show that the early Egyptians understood the science that would later become the basis of true mummification.

Jana Jones, PhD in Egyptology, is a Macquarie University Research Fellow (2014 to 2017) in the Department of Ancient History. Her current research project is entitled ‘Secrets of the Ancient Egyptian embalmers: an archaeological, historical and scientific investigation of the origins and development of mummification’. She does not work for, consult to, own shares in or receive funding from any company or organisation that would benefit from this article, and has no relevant affiliations. This article was originally published on The Conversation. Read the original article.