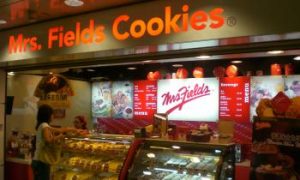 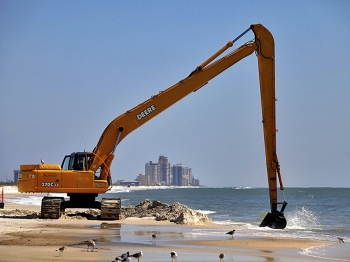 Workers clean oil left from the 2010 Deepwater Horizon oil spill in the Gulf of Mexico on March 10, 2011 at Perdido Key State Park in Pensacola, Florida. (Eric Thayer/Getty Images)
US

By Mary Silver
Print
The National Wildlife Federation (NWF) said it may take decades to understand the impact last year’s Gulf oil spill had on wildlife. Nearly a year after the April 20 Deepwater Horizon oil well explosion started the Macondo well spill, it is clear that endangered sea turtles suffered a heavy blow. Dolphins and brown pelicans appear to be more resilient than the turtles, perhaps partly because they were more abundant before the disaster.

Dr. Doug Inkley, a senior scientist with NWF, wrote the report, "The Long Road to Recovery: Wetlands and Wildlife One Year Into the Gulf Oil Disaster." Reviewed by NWF’s science advisory panel, it was released this week near the one year anniversary of the April 20 blowout.

The main findings are that habitat destruction from the spill continues continues and habitat restoration must be done for fish and other wild animals to recover. Gulf of Mexico wetlands and beach and marine habitats were already strained by unwise development and by hurricane Katrina. They are economically and environmentally valuable areas for seafood, birds, clean water, flood control and as buffers for hurricanes.

“While the disaster response has focused on removing oil, little action has been taken to address the long-term species threats and wetlands habitat degradation exacerbated by the oil disaster. Much more needs to be done to ensure a complete recovery,” said Inkley in a NWF statement. “It’s also important to remember what we don’t yet know. Previous catastrophes like the Exxon Valdez have shown that impacts of oil disasters last many years, or even decades.”

According to the report, even though there has been a spike in dolphin deaths during this spring’s breeding season, their long-term outlook for recovery is good. They were and are still abundant in the Gulf of Mexico. Shrimp and pelicans also seem to be on the road to recovery. But bluefin tuna suffered heavy impacts. “More than 8,000 birds, sea turtles, and marine mammals were found injured or dead in the six months after the spill,” according to NWF.

The group called for political action to make sure money from BP goes to restoring habitat damaged by the disaster. It recommends that deep water oil drilling should be restricted, and that money should be allocated from BP’s fines to fund research about the impacts on wildlife, as well as to habitat restoration.

“The Obama administration has taken some important steps toward reforming the oversight of drilling, but so far Congress has failed to act,” said David Muth, state director of NWF’s coastal Louisiana program in a press release. “Without legislation to direct fines and penalties from the oil disaster to restoring the Gulf Coast’s wetlands and coastal ecosystems and a comprehensive Gulf Coast restoration program, the outlook for Gulf recovery will remain uncertain.”