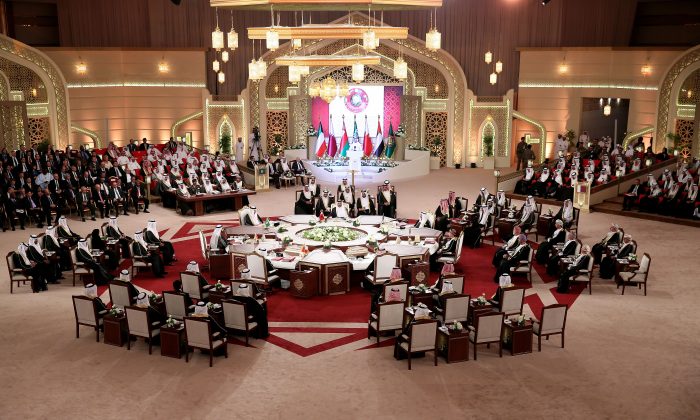 A general view of the meeting of leaders during the Gulf Cooperation Council (GCC) summit in Doha on Dec. 9, 2014. (STR/AFP/Getty Images)
Opinion

Gulf States Are Torn Between Economic Sense and Military Ambition

There is a certain irony in the Arab Gulf States’ rising power across the Middle East and North Africa. International prestige, the ability to intervene militarily in regional conflict, and holding the same leverage as international financial institutions in aid and investment are what these states have long coveted. But now that they have the power—both economic and military—Gulf States like Qatar, Saudi Arabia, and the UAE are faced with the dilemma of demonstrating their dominance without destroying the neighborhood.

Now that they have the power—both economic and military—Gulf States are faced with the dilemma of demonstrating their dominance without destroying the neighborhood.

These Gulf States’ foreign policies are increasingly at odds with their economic interests. Twenty or 30 years ago, times of war and conflict in the wider Middle East usually meant marginally better economic times for the Gulf States. Oil prices would rise, Dubai could host informal arms negotiations, and the relative calm of the backwater Gulf cities beckoned those in the Middle East (and further abroad) seeking a place to shelter investment, and sometimes to continue opposition politics. From the 1960s to the 1980s the Gulf States provided a welcome for many expatriate Arabs looking for jobs in education, health care, and security services.

But no more. The economies of the Gulf States have changed dramatically since the beginning of the second oil boom, between 2003 and 2014. Joined together in the Gulf Cooperation Council (GCC) trade bloc, they are more integrated into the regional and wider international economy in trade and investment flows.

Their labor markets are less reliant on Arab nationals, with the influx and preference for workers from Asia since the 1990s. Meanwhile, citizens living in the Middle East and North Africa (MENA) region are more dependent on family members working in Gulf States, as a source of remittances (money sent to foreign nationals abroad). At the same time, the mega real estate projects that have propelled infrastructure development across the Gulf in the last decade have relied on wealthy expatriates as builders and buyers of these ventures.

The GCC’s outward investments in equity markets, especially towards Europe and the United States, means it is also more integrated globally. And it has large amounts of foreign direct investment in infrastructure, agriculture, and real estate across the MENA region.

The figures speak for themselves. Average annual inflows of foreign direct investment into the GCC have blossomed to more than US$30 billion in the decade since 2001. This is up from less than $1 billion during the 1990s and constitutes the bulk of total foreign investment in the Arab world). The GCC States are now more sensitive to the financial stability of their local markets, as well as to the performance of their investments regionally.

With the prolonged decline in oil revenues, the stakes for ensuring stability and continued financial flows both into the Gulf, and the profitability of ventures flowing out of the Gulf, are high. Gulf state investments are also in unlikely places, including shared investments with deemed adversaries like Iran. In non-oil trade flows, the GCC States continue to lag behind other regional organizations in promoting trade, though it has certainly been increasing in the last decade:

The strength of their economic influence in the region lies in huge flows of capital—often a mixture of remittances, foreign aid, and foreign direct investment under the auspices of state-related bodies. This has enabled the Gulf States to usurp international institutions in shaping economic reform across the MENA region, especially in Egypt and other oil importers.

Politically, however, the GCC is engaged in numerous interventions across the region that have caused significant disorder and pose a threat to their mutual economic prosperity. The Gulf States were successful in crushing the Arab Spring within their own countries and cementing their development agenda. By contrast, their interventions in Libya, syria, Yemen, and Egypt have stoked the chaos there, putting the stability of the region at risk.

In the last year, the foreign economic policies of the UAE and Saudi Arabia have specifically targeted the political and economic stability of Egypt and Lebanon. In Egypt, the attempt has been to support the Sisi administration, while also creating opportunities for state-related entities to invest in Egypt’s housing and infrastructure development.

In Lebanon, they have punished the political establishment for its perceived proximity to Iran by reneging on military aid transfers and discouraging economic links and travel there for Gulf citizens. Their foreign policies, in arms transfers or direct confrontation, have targeted Libya, Syria, and Yemen. Iran remains a target of diplomatic confrontation.

In each of these interventions, there is an incumbent economic cost to the GCC States. The war in Yemen is probably the best example of a mounting military expenditure that will only be dwarfed by the cost of rebuilding Yemen, which surely the UAE and Saudi Arabia will have to help foot. The Gulf States would therefore be wise to start dovetailing their foreign policies with their economic interests by fostering stability instead of conflict. And sooner rather than later.

Karen E. Young is a visiting fellow at the Middle East Centre, London School of Economics and Political Science. This article was originally published on The Conversation.