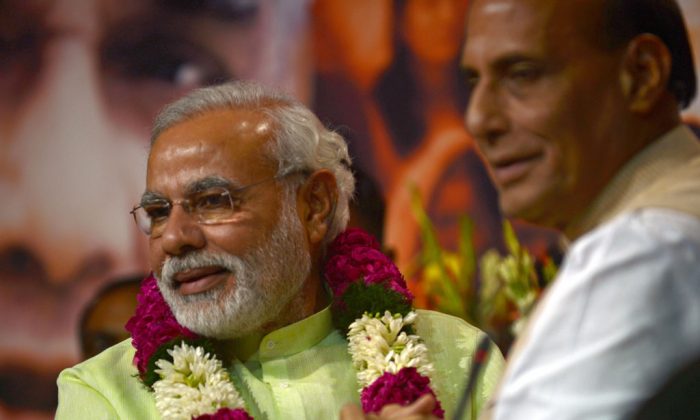 Gujarat Model of Foreign Policy: Let Economy Be the Driver

WASHINGTON—India’s newly elected Prime Minister Narendra Modi’s foreign policy agenda can perhaps be summed by the well-known aphorism of an American politician: “It’s the economy, stupid!” Modi’s relatively few statements on foreign policy during the campaign suggest a belief that India can only be consequential on the world stage with a growing economy. Economic growth and nationalism will almost certainly be the two major drivers of Indian foreign policy under the stewardship of the Bharatiya Janata Party (BJP) leader swept to power on the slogan of development first. His parliamentary strength also allows him to be decisive, even daring in the conduct of foreign policy, an opportunity lacked by his predecessor.Emphasis on trade, investment, poverty reduction.

During his 12 years as chief minister of the state of Gujarat, Modi gained experience in foreign affairs in his search for foreign direct investment, and outside investment helped fuel Gujarat’s high rates of economic growth. His several overseas trips to Japan, China and Singapore were prompted by a search for more capital, especially in infrastructure. His annual and widely attended “Vibrant Gujarat” conclaves gave him the opportunity to interact closely with Indian and foreign entrepreneurs. The popular appeal of his campaign narrative applying Gujarat’s growth model on to the larger India stage is perhaps the most significant reason for his massive electoral victory.

Therefore his “Look East” policy as chief minister will likely constitute a key element of his larger foreign policy as prime minister to bring India’s annual economic growth rates back to the 8 to 9 percent range of the last decade. When I met him in July 2013, the goal of increased investment and trade with East and Southeast Asia was the one foreign policy issue he mentioned to me in a long discussion that focused on how to strengthen India’s sluggish economy. The one country he specifically mentioned in this regard was Japan. He and his Japanese counterpart, Shinzo Abe, admire each other and what the other is trying to achieve. Both are ardent nationalists committed to breaking out of a recent history of international passivity, and each sees the other as important in that effort.

Reviving the robust growth rates of the past decade also has collateral security advantages. A faster economic growth rate would permit India to speed up its military modernization program at a time when China, with which it has an unresolved border dispute, is engaged in a substantial military buildup along with more assertive efforts to increase its control over adjoining maritime areas also claimed by other countries. Modi secured some Chinese investment for Gujarat and might offer to deepen economic cooperation if China is more cooperative on security issues, especially on questions regarding their disputed borders.

A more secure India is in a better position to leverage its strategic partnership with the United States – and a fast-improving relationship with Japan – to constrain Chinese policy toward India. Regarding leverage with the United States, an economically robust India with a decisive prime minister and a massive popular mandate is in a good position to revive the presently languishing US-Indian relationship. There would then be good reason for American interests – including businesses looking for overseas customers and the jobs that go with that as well as the security establishment looking for reliable partners able to bring about a better balance of power in Asia – to pressure the US administration to move beyond an array of bilateral irritations and take advantage of what India could do to help both the American economy and its security.

A strong India is valuable in itself in building an acceptable balance in Asia. Working together would make more likely former BJP Prime Minister Atal Bihari Vajpayee’s description of the US and India as “natural allies.” The BJP’s 2014 campaign manifesto suggests, “We [a BJP government] will create a web of allies to mutually further our interests. We will leverage all our resources and people to play a greater role on the international high table.” This projected “web of allies” would almost certainly stop short of security arrangements that would undermine India’s traditional commitment to “strategic autonomy” and an independent foreign policy.

Perhaps anticipating India’s growing strength under Modi, President Barack Obama issued a personal invitation for the prime minister to visit the US. However, the president would have to spell out how India fits into strategic objectives of the US, something that former President George W. Bush and his Secretary of State did so well and that has been missing so far in this administration.

Regarding South Asia, India’s economic growth also has a direct bearing on the Indian goal of remaining the preeminent power in South Asia, a standing now challenged by the growing Chinese economic involvement in the region and its increasingly frequent naval intrusions into the Indian Ocean. India’s South Asian neighbors, with the prominent exception of Pakistan, acknowledge that preeminent position of India, though not necessarily with great enthusiasm. Most have tried to use China as leverage against India. That tactic would be harder to achieve with an economically robust India that is their major trading partner and investor – and offering nearby access to higher education, jobs and tourism.

Afghanistan recognizes Indian preeminence enthusiastically, perceiving India as a counterweight to Pakistan with its recent history of interference in Afghan affairs. India is already a major source of aid and investment in Afghanistan, and a Modi government would almost certainly sustain that because of the country’s potential as an entry of Indian trade to the Central Asian republics and Russia.

Pakistan desperately needs trade and investment, and an economically robust India offers the best source for both. Modi might well follow in the footsteps of a person he greatly admires, former Prime Minister Vajpayee, and seek a negotiated resolution of the Kashmir question with Pakistan. Like conservative Richard Nixon normalizing with communist China, Modi is in a better position to do this than was Manmohan Singh, his predecessor, as few could charge that the nationalist BJP would be abandoning Indian national interests. At the same time, Modi has publicly warned Pakistan to shun its anti-India attitude. At the first rally after being selected as the party’s prime ministerial candidate, Modi said: “The rulers in Pakistan should resolve that they will not allow terrorist in Pakistan for 10 years, and will not protect terrorists, will not allow its soil to be the breeding ground for terrorists.” Rather, India and Pakistan should work together to bring down the high poverty rates, though Modi is prepared to get tough if provoked, as was Vajpayee.

One advantage for Modi in controlling the foreign policy agenda, when compared to Singh’s coalition government, is his solid parliamentary majority. The BJP alone has more than 10 seats above a majority and its allies have another some 50 seats. Prime Minister Modi can formulate tough policy positions without fearing that an ally would force him to back down, as Mamata Banerjee, head of a regional party in West Bengal, did when she forced the Manmohan Singh government to abandon a river-sharing agreement with Bangladesh. This greater room for maneuver allows Modi to be innovative and daring in his foreign policy decisions.

Modi however has relatively little experience in foreign affairs and revealed little about his views in this area during the campaign. He will almost certainly rely heavily on foreign service professionals, though he is likely to pay close attention to outside experts, especially those who bring expertise on trade and investment. Arching over the decision-making process will be Modi’s commitment to nationalism and transformation of India as a consequential actor on the world stage.

Walter Andersen heads the South Asia Program at the School of Advanced International Studies of Johns Hopkins University. He is the co-author of a definitive study on the Hindu nationalist party The Brotherhood of Saffron, and has written extensively on India’s domestic politics and the international politics of South Asia. He served almost 30 years in the US State Department both in the United States and overseas, including India.

Republished with permission from YaleGlobal Online. Copyright © 2014, Yale Center for the Study of Globalization, Yale University.