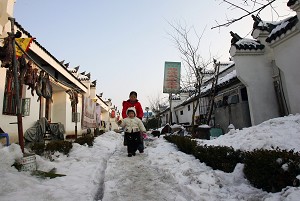 The worst prolonged snow, rain and cold weather period in a decade has hit about 19 provincial level regions in China, responsible for the deaths of at least 60 people and paralyzing air, rail and highway traffic and stranding tens of thousands of passengers. (China Photos/Getty Images)
China

Guizhou Residents: 'We are Living in Darkness with No Help'

Icy rain the likes of which has not been seen in a century has brought tremendous hardship and great loss for residents in Guizhou Province. One resident said, “It is so terrible. We are living in a world of darkness, silence, helplessness and hopelessness. Every minute seems like a thousand.”

A villager from the Zunyi area told the reporter that it was the first time in her life that she had seen such a big snowstorm with icy rain. Actually she had never even heard of sleet like this before.

It has been raining for more than half a month and has not shown signs of stopping. The weather has been misty, hazy, rainy and chilly, and over 10 inches of ice and snow has accumulated on her roof.

She said the piglets were frozen to death and the vegetables were covered with a thick layer of ice. Life for her family was extremely difficult since they had lost water and power for more than two weeks.

To get water, her family had to fetch ice from the outside and let it melt. They hadn't done any laundry or taken a shower since the day they lost water.

Their world is covered with snow and ice, they stay inside for almost the entire time, and they can't get any vegetables from the outside except for the frozen vegetable leaves grown in their own field.

They still had some supplies of coal for cooking and heating, but she was very worried that they would run out of them before the storm stops. The only thing that pacified her was that her telephone was still working though her cell phone was not.

When asked if the authorities had shown any concern for their suffering or provided any solutions to relieve their situation, she answered, “The government officials are all involved in official corruption. Who would care about us the common folks? I have not seen any officials at all. We, the villagers, just have to count on ourselves.”

Hot peppers at almost every meal

Another Guizhou resident said that, the entire province was undergoing a most serious blackout. Even with the traffic lights off, he could see that the ice on the road was more than a foot thick, and no vehicle or pedestrian could be seen.

He also said that the entire province had been pitch black at night as if it was the end of the world. At home, only some candles, coal and a hot water bag could bring his family some light and heat.

Many workplaces, factories and schools had to close due to the loss of power and water. Some residents living in the upper stories of high buildings were trapped inside for days because the elevators had stopped working, he said. All the stores and restaurants on the streets were closed.

As for food, they only had a limited amount of rice stocked at home. The vegetables were running out, while the prices soaring. Therefore his family had hot peppers to go with a given amount of rice in a bowl at almost every meal.

Several people frozen to death on the freeway

An Internet user told the reporters that, due to icy road conditions, the buses from some southern areas were stranded on the freeway and several passengers were frozen to death. Knowing the roads were closed in Guizhou, the authorities in the south were irresponsible in letting the buses keep coming to the place buried in ice and snow: This caused the suffering and death of the passengers from the south.

According to the surfer, the ice and snowstorm disaster has turned China back into a primitive society, where walking has become the major means of transportation.

“Leaving millions of people in cold and dark reveals the fragility of 'socialism with Chinese characteristics,' yet exposes the sham of it. Guizhou is now covered with ice and snow, beneath the white surface lie the “administrative achievement” projects—developed power plants that are dead due to the fragile power network, luxurious office buildings and large guest houses that look like ice sculptures, and isolated counties that are forgotten,” said the user.