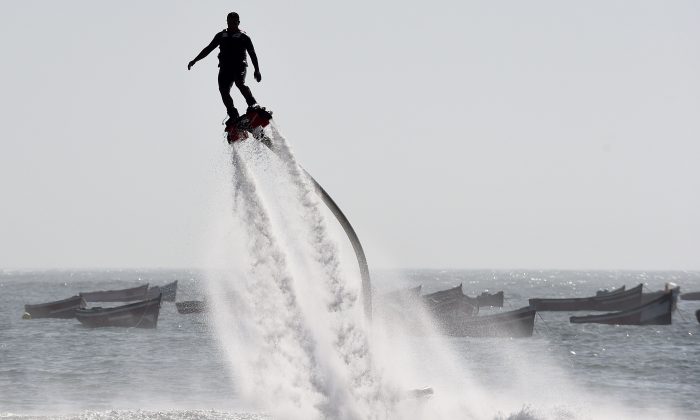 A man performs on a water-propelled flyboard on Sidi Bouzid Beach on August 16, 2014 in the Moroccan port city of El Jadida. (Fadel Senna/AFP/Getty Images)
International

The Flyboard Air inventor set the record Saturday in France, riding his hoverboard over a distance of 7,388 feet, according to a report on guinnessworldrecords.com. The previous record was 905 feet, set by Omni Hoverboard inventor Catalin Alexandru Duru.

Confirmed: @frankyzapata has a new @gwr title for Farthest flight by a hoverboard https://t.co/0k7c6AEbj5 pic.twitter.com/somwMJqtbe

The 37-year-old French jet ski champion was some 150 feet off the ground for most of his historic flight—which took place off the coast of Sausset-les-Pins in the south of France—and was trailed by a fleet of boats and jet skis.

Zapata rode on the Flyboard Air, which was developed by his company, Zapata Racing. The hoverboard can fly to a maximum height of 10,000 feet and reach over 90 mph.

Following the record-setting run, Zapata told reporters, “This has really been a life’s work”.

Previously Zapata Racing developed some water-propelled devices like the original Flyboard, which is a vehicle that connects to a personal watercraft turbine with a long hose.