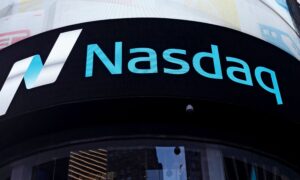 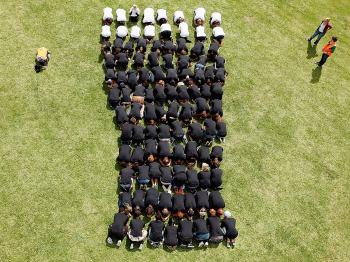 GLOBAL BRAND: Guinness celebrates its 250th year with a human shaped pint of Guinness at Hooten Reserve, in Auckland, New Zealand. There are plans to celebrate the anniversary across the globe. (Hannah Johnston/Getty Images)
Business & Economy

Rita O'Connor
View profile
Follow
biggersmaller
Print
Celebrations are due to kick off soon at James Gate Dublin to celebrate ”Arthur’s Day”. Spokesperson for the brewery Evelyn Roach told The Epoch Times, “At precisely 17:59 local time on September 24th, hundreds of thousands of Guinness drinkers around the world will raise a toast to Arthur Guinness to commemorate the 250th year anniversary of the Guinness brewery at St. James Gate.”

A gala event will be held at Guinness Hopstore 13 which will be converted to a music studio for two thousand guests who will be especially flown in from all around the world for the event. Among the many artists who will perform will be Estelle and the Black Eyed Peas.

Guinness Co. said in a press statement that the global celebrations will include a Dublin-based party led by outstanding music acts, with satellite events in New York, Lagos, Yaounde and Kuala Lumper.

This festival will be continuing in an old tradition because according to A New Description of Ireland, written by Barnaby Rich in 1610, an annual summer festival used to take place at St. James Gate. The Gate was the ancient entrance to the city and dates back to the 12th century. The gate was named after St James who was the patron saint of pilgrims.

The tradition of the Guinness brewery began when Arthur Price who was the Vicar of Celbridge bought Kildrought brewery, Kildare in 1722 and placed his land steward Richard Guinness in charge of production. When the vicar died he left 100 pounds in his will to his godson Arthur Guinness, who was the son of Richard Guinness, to help him expand the brewery.

September 24th 2009 will mark the anniversary of when the 9000 year lease was signed for the St James Gate brewery. In 1759 Arthur used his inheritance to buy St. James Gate which at that time comprised of a house, stables, a few acres and a rundown brewery.

Arthur was accepted into the trade union of brewers six months before he bought the brewery. At the time in Dublin there were 50 small breweries and Arthur by degrees bought them all. Guinness was originally sold by the quart (2pts) because according to Evelyn Roach. the earliest recorded price of Guinness was four pennies a quart.

Arthur married Olivia Whitmore who was the cousin of nationalist Henry Gratton and together they had 10 surviving children. They lived in the house beside the brewery.

From the outset, Arthur established his commitment to improving the lives of people around the world where Guinness did business. Guinness was one of the first businesses in Ireland to provide proper health care and pensions for its employees and their families. They donated land for public parks and recreation centres and provided low cost housing.

In 1913 when almost the entire workforce of Dublin was on strike in protest against dismal working conditions and low wages, Guinness employees did not strike. In fact it was considered good fortune among Dubliners to secure a job in Guinness. By the 1930s Guinness had become the biggest brewery in the world.

Arthur’s entrepreneurial skills had translated his 100 pound inheritance into a multi-billion dollar industry with outlets all around the world. Today the family, though not on the board, are shareholders in partnership with the Grand Metropolitan Company.

The success of the Guinness name is not just related to stout. A chief executive with the Guinness Company by the name of Hugh Beaver came up with a bright idea that would resolve disputes between punters at the bar. He had the novel idea of compiling lists of dates, fact, and events and was to be kept behind the bar. This evolved into the Guinness book of records which went on to sell over 100 million copies worldwide.

Arthur liked to claim his line of descendency was from Magennis the Gaelic Catholic clan from Co Down. The next step for the Guinness Company is the establishment of the Arthur Guinness Fund, which aims to enable and empower individuals with skills and opportunities to deliver a measured benefit to their communities. Guinness will donate 5 million Euro to the fund which will be active from this month.