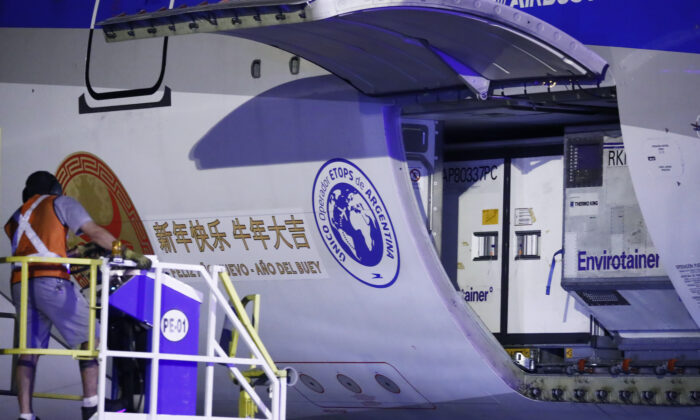 A worker unloads containers on an Airbus 330-200 of Aerolineas Argentinas carrying 904,000 doses of Sinopharm vaccines after it arrived at Ezeiza International Airport from China in Ezeiza, Argentina, on Feb. 25, 2021. (Marcos Brindicci/Getty Images)
Thinking About China

While the world has focused on the war in Ukraine—and before that, the pandemic, Beijing’s crushing of Hong Kong, the situation in the Middle East, and other big events—China has been steadily replacing U.S. influence in Latin America.

The consequences aren’t just limited to trade, economic, and market issues, although those are all certainly important. Beijing’s Latin American relationships are also quite strategic in nature.

One would imagine that given that the U.S. influence in Europe and the Middle East is waning, preserving our own regional influence and security would be on our list of things to do. So, too, might doing everything possible to blunt our adversary’s strategic moves so close to home.

But evidently, that’s not the case.

This nonreaction by the United States is perplexing, to say the least, and doesn’t bode well for anyone—except China.

China’s penetration into Latin America looks different from Cuba, the old Soviet client state from the 1960s. An overt communist takeover such as Cuba in 1959 or even Venezuela’s descent into a Marxist hell over the past two decades is easy to spot and demonize.

Although on the surface China’s “appropriation” of Latin America appears to be benign, it’s a much bigger problem than some may imagine. As the latest country to join China’s Belt and Road Initiative (BRI, also known as “One Belt, One Road”), Argentina is a particularly pungent example of Beijing’s strategically significant, but corrupting relationships with political leaders.

Instead of taking over a nation with military force, as it were, the Chinese Communist Party (CCP) uses its formidable financial power to capture assets within nations that it can use to strengthen China’s geopolitical posture. CCP leader Xi Jinping has had his eye on Latin America in general, and specifically resource-rich Argentina, for years. In 2017, he categorized it as a “natural extension of the BRI.”

As noted above, the “natural extension of BRI” is not just limited to trade relationships. Its policy extends to the corruption of national leaders who, in turn, allow Beijing a freer hand in exploiting host nation resources.

Targeted assets are typically farmland, ports, fishing rights, and infrastructure projects, as well as politicians. Beijing has figured out that owning the leadership by enrichment and influencing media outlets to avoid criticism is a much smarter way to control another country.

Trade With China Is Booming

Beijing is already reaping the fruits of its efforts with Buenos Aires.

Having recently replaced Brazil as Argentina’s largest trading partner, Beijing is now in an advantageous position to expand its positive relationship as trade figures continue to rise. This fact alone gives our top geopolitical adversary enhanced influence over one of the most resource-rich nations in the hemisphere.

The CCP deepened its hold on Buenos Aires by agreeing to finance several major infrastructure projects. Those projects include nuclear power plants, dams, railways, solar energy, and more toward the further joint development of Argentina’s urban and rural regions. That influence has already paid off with access to other, more strategic assets.

The rare earth element lithium is a critical component in high-tech products, from missile guidance systems to electric car batteries. As part of the “lithium triangle,” which also includes Chile and Bolivia, Argentina is the world’s fourth-largest lithium producer. Not surprisingly, it plays a significant role in China’s ongoing strategy of cornering the world’s supply of strategic metals.

Boosting the Yuan, Beating the Buck

A bilateral currency relationship is also part of Beijing’s strategic campaign for the domination of Latin America and beyond. Given the fact that Argentina has been in debt to the International Monetary Fund for decades and that inflationary financial policies in the United States ultimately impact the Argentine economy, Buenos Aires is open to a new currency arrangement with China.

It may or may not benefit Argentina in the long term, but it certainly helps to internationalize the yuan, which hurts the dollar and helps China.

Argentina is also home to a Chinese-owned space station located in the northwest of Patagonia. This secretive installation is run by the People’s Liberation Army, which effectively makes it an advanced foreign military base with strategic implications.

The purpose of the base is suspicious, but U.S. intelligence speculates that it’s a spaceport from which to launch anti-satellite weapons.

On the flip side, with all the information and evidence of how bad a partnership with China’s BRI program can turn out, why would the leadership of Argentina agree to get in bed with Beijing?

It’s no secret that nations that deal with China end up being owned by the CCP in debt traps.

Furthermore, as the world’s largest prison nation and the source and cause of the global CCP virus pandemic, one would imagine that China’s pursuit of colonialism in Argentina—which has powerful labor unions—would trigger outrage among the anti-colonialism crowd.

But that doesn’t seem to be the case, either.

Will the US Be Left Behind?

One reason could be that the United States isn’t paying attention to Latin America the way China certainly is. Another may be that Beijing is making Buenos Aires an offer that it just can’t—or won’t—refuse.

In either case, U.S. power and influence throughout Latin America—our own “backyard,” as it were—is being directly challenged by China, the most powerful communist nation on Earth.

Sadly, our leaders in Washington are doing virtually nothing about it.