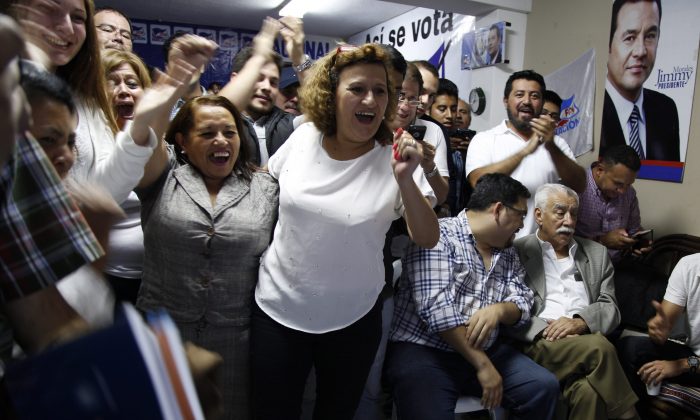 Supporters of television comedian and presidential candidate for the National Front of Convergence party Jimmy Morales, cheer upon listening to the preliminary results of the general elections at their party headquarters in Guatemala City, Sunday, Sept. 6, 2015. (AP Photo/Luis Soto)
Americas

GUATEMALA CITY—A former television comic was heading for a runoff with either a wealthy businessman or a former first lady in voting for Guatemala’s next president, days after the Central American nation’s leader resigned over a corruption scandal.

With about 79 percent of polling stations reporting early Monday, comedian Jimmy Morales, who has never held elective office, was leading with 26 percent of the vote.

He was followed by businessman and longtime politician Manuel Baldizon, with 18.5 percent, and ex-first lady Sandra Torres, with 17.7 percent.

Assuming no candidate in the field of 14 gets a majority, the top two finishers advance to a runoff to be held Oct. 25.

“The people are showing that they do not want a group like that for the future,” Morales said, referring to Baldizon’s LIDER party.

The candidates in Sunday’s election faced an uncomfortable challenge: trying to win votes in a nation where former President Otto Perez Molina remains in court custody awaiting a decision on whether he will be tried on graft charges.

Most of the candidates were old-guard figures picked to run before energized prosecutors backed by a mass anti-corruption movement toppled Perez Molina’s administration. Many voters were so skeptical that they campaigned for the election itself to be postponed to give them a new crop of choices.

Baldizon had led most polls with roughly 30 percent backing. His running mate is accused by prosecutors of influence trafficking, but as a candidate enjoys immunity from prosecution.

Guatemalans were also voting for vice president, members of Congress and the Central American Parliament, and local authorities for municipalities nationwide.

A key question was the level of protest vote in the face of the customs corruption scandal, which also forced Perez Molina’s previous vice president, Roxana Baldetti, to resign. She, too, is accused in the scheme.

Activists had urged voters to go to the polls wearing black clothes of mourning, abstain or cast null ballots. On the streets, it was hard to find a campaign poster that hadn’t been covered with insults. Tens of thousands had joined demonstrations asking for the vote to be postponed.

About 8.5 percent of votes were blank or spoiled.

Baldizon, who finished second in the last presidential race, initially campaigned on the slogan “It’s his turn” — a reference to the fact that the last four elections have been won by the previous runner-up. It struck many critics as a display of what’s wrong with the country’s politics. At protests, demonstrators have chanted: “It’s not your turn.”

Baldizon has acknowledged Guatemalans’ disgust with crime, corruption and impunity. His campaign website vows a “modernization of the democratic state” to reform government and combat poverty and social inequality.

But after Baldizon’s campaign blew past the legal ceiling on electoral costs, he ignored orders to stop spending.

Morales boasts of his outsider status and says he is part of the uprising against corruption. He has promised greater transparency, including media review of government contracts.

Torres divorced former President Alvaro Colom ahead of the last presidential race to try to get around rules barring presidential relatives from running, but was still ruled ineligible. A businesswoman and longtime political party figure, she is proposing a coalition government to respond to the concerns of outraged citizens.

Zury Rios — the daughter of former dictator Efrain Rios Montt, who faces charges of crimes against humanity for killings by security forces during his 1982-83 regime — was also on the ballot. She was taking around 6 percent of the vote.

One of the first to cast his ballot was President Alejandro Maldonado, who was vice president before he swore in to office this week after Perez Molina’s resignation. He said it was citizens’ responsibility to vote, and then for elected officials to live up to their duty.

Businessman Salvador Paiz said the political crisis touched off by corruption scandals will encourage the public to keep a close eye on the next crop of elected officials.

“I see a government that is going to be much more monitored by Guatemalan society, and I think that’s great. … Today we Guatemalans are coming out with courage to denounce acts of corruption,” Paiz said.

Attorney General Thelma Aldana said authorities had received about 1,200 complaints related to the election, including the burning of some ballots in the municipality of Patzun, north of the capital.