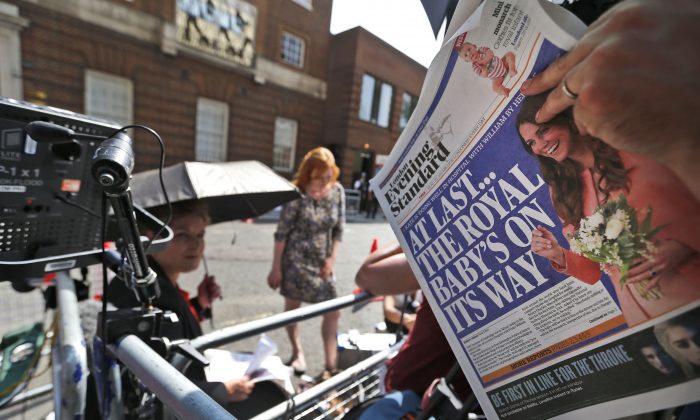 A news cameraman reads a newspaper across from St. Mary's Hospital's exclusive Lindo Wing in London, Monday, July 22, 2013. Buckingham Palace officials say Prince William's wife, Kate, has been admitted to the hospital in the early stages of labor. Royal officials said that Kate traveled by car to St. Mary's Hospital in central London. Kate _ also known as the Duchess of Cambridge _ is expected to give birth in the private Lindo Wing of the hospital, where Princess Diana gave birth to William and his younger brother, Prince Harry. The baby will be third in line for the British throne _ behind Prince Charles and William _ and is anticipated eventually to become king or queen. (AP Photo/Lefteris Pitarakis)
Royals

The Guardian offered a “Republican” option for people who are tried of hearing about the birth of Princess Kate.

The British newspaper included a Republican link at the top left of its front page on its U.K. edition on Monday, following the widespread coverage of Duchess of Cambridge Kate Middleton going into labor at a hospital in London.

According to the Washington Post, the paper’s website included both a “Republican” and “Royalist” option. The former would remove all news about the royal baby.

The term “Republican” has a different meaning in the U.K.’s context, meaning a supporter of a republic without a monarchy. A “Royalist” means that a person supports the British monarchy.

As of Monday afternoon, the Guardian took the links down.

Prince Charles, the grandfather of the son, issued a statement.

“Both my wife and I are overjoyed at the arrival of my first grandchild. It is an incredibly special moment for William and Catherine and we are so thrilled for them on the birth of their baby boy,” the statement reads.

He added, “Grandparenthood is a unique moment in anyone’s life, as countless kind people have told me in recent months, so I am enormously proud and happy to be a grandfather for the first time and we are eagerly looking forward to seeing the baby in the near future.”

The baby is the couple’s first child.