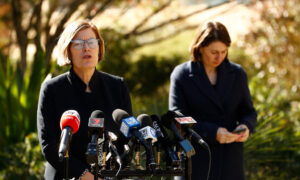 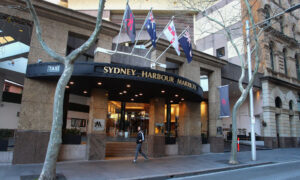 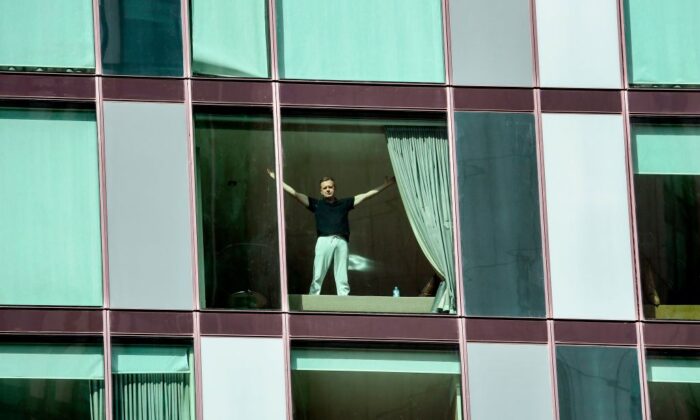 A man gestures to the cameras in an inner-city hotel where travellers returned from overseas are staying in isolation in Melbourne on March 30, 2020. (William West/AFP via Getty Images)
Australia

A security guard was removed from a Victorian quarantine hotel after he slipped an inappropriate note under a guest’s door.

Emails released by Victoria’s hotel quarantine inquiry on Aug. 27 reveal the incident took place at the Crowne Plaza on April 14.

“The note said something like ‘Hey hun, add me on Snapchat’—she looked up his name on Facebook and it’s a security guard and wants to complain,” the email reads.

The security guard had earlier taken the woman outside for a fresh air break.

Senior Department of Jobs, Precincts and Regions employee Paul Xerri replied, saying: “I will contact Wilson Security now to have this guard removed.”

Another person from the department noted it was the “second such incident this week and unacceptable.”

“Paul as you would be aware—we have had significant issues with Wilson from day dot,” Global Victoria chief executive officer Gonul Serbest wrote in a later reply, asking if it was possible to stop using the company.

In another email exchange, Jobs department staff complain about the lack of police presence at hotels, referring to an incident at Crown Metropol on March 30, during which a man escaped from his hotel room at 3 a.m. for a cigarette.

“We’ll use this to bolster our case to DHHS that they should insist on a 24/7 police presence. Sydney have the army there for Pete’s sake,” the email reads.

Claire Febey, an executive director with the department, told the inquiry police wanted private security guards to take the lead role in guarding the hotels.

She was present at a meeting on March 27 when Emergency Management Victoria Commissioner Andrew Crisp and Victoria Police Commander Mick Grainger made the decision.

“I understand the preference of Victoria Police, or the Chief Commissioner, is that private security be the first line of security, and the police to respond as required. Is that your understanding, Mick?” Crisp said, according to a transcript of the meeting.

“So just curious as to who’s going to take responsibility around contracting private security? Is that DJPR? Claire?” Crisp said.

“Yes. I understand that that’s for us to take up,” Febey replied.

Febey believed police needed to be present at the hotels, despite the arrangement.

“It was my view that Victoria Police should be present on-site at hotels 24/7, and that perimeter or proximate patrol was not adequate,” she said.

She escalated her concerns but was informed it was “sufficient for Victoria Police to be called through 000” if there was an emergency.

“I continued to press the issue, but gained no traction,” Febey said.

Katrina Currie, also from the Jobs department, was instructed late on March 27 to find security guards for the program.

The first company to reply to her email the following morning was Unified Security.

They were hired to work at the first hotels, which began taking returned travellers on March 29.

Currie told the inquiry her team looked for both “large and good employers” who paid award wages.

“I didn’t think that they would use subcontractors. Part of the reason I was asking about award conditions was making sure that they were directly employing them,” Currie said.

Under cross-examination, she admitted it was possible subcontracting had been mentioned in conversations with the security companies.

She said each firm would have to supply personal protective equipment for their staff as it was in “short supply.”

Febey told the inquiry her department wanted all staff involved in the program to wear PPE but the “DHHS was seeking to limit and conserve PPE usage.”

The inquiry resumes on Friday, with hotel bosses to be called to give evidence.