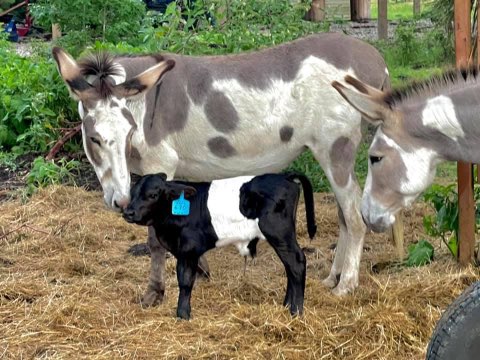 Everyone has heard of guard dogs for protection, but guard donkeys? It is the latest method cattle ranchers are using to help deter coyotes from grabbing calves from their herds.

Even though this form of protection has been around for many years, it is making a resurgence on ranches around the country. Referred to as “guard donkeys” these beasts of burden are becoming an important tool for farmers and ranchers to ward off predatory animals such as the coyote to protect their vulnerable calves.

Rebecca Mann owner and operator of Mann Ranch in Gainesville Florida said they have been utilizing this method for a “number of years” and would not consider using anything else.

“You can’t be with the herd (cattle) 24/7,” Mann told The Epoch Times. “We will find dead coyotes in the fields where the donkeys have done their job.”

“We let nature take care of nature,” she said.

Mann said the donkeys see canines or bobcats as predators and will “run them down and stomp them to death.”

Although she has not seen the donkeys in action because coyotes are nocturnal and will only hunt at night, she sees tell-tell signs of unearthed ground where the donkeys have stomped coyotes.

Female donkeys or Jenny’s are oftentimes more protective by nature, she said. “We have seven females that we split with altered males in pairs so that they protect the herd better.”

A donkey—also known as a burro—is normally enough to drive away any predator, experts from the Florida Fish and Wildlife Conservation Commission (FWC) say, because a well-placed kick from an “angry donkey” can cause a predator major damage or death.

Experts from FWC also say that ranchers are using a “more humane” treatment for predator controls such as guard animals instead of poisons or outright “shooting the predator,” a spokesperson for FWC, Lisa Thompson, told The Epoch Times.

“There are several methods we recommend to help prevent predation of livestock by wildlife and domestic animals, including the potential use of guard animals such as donkeys or other animals,” she said. “It is important to ensure that in-depth research is done before acquiring a guard animal to ensure that it is well suited for your specific situation and location. Some ranchers do use guard animals such as specific dog breeds, llamas, or donkeys to help prevent predation to their herds.”

Traditionally, coyotes are not instinctively afraid of donkeys as most see them as a food source rather than to be feared. But by nature, a donkey is aggressive enough to drive away predators. When loud noises like braying fail, the donkey will resort to violence and kick or stomp the coyote to death, which makes them great “guardians” of cows, horses, and goats.  It is estimated that it would take one donkey to adequately guard three members of a herd.

According to The University of Florida Institute of Food and Agricultural Services website, when it comes to donkeys, “more is not better” as most ranchers add just one or two donkeys to a herd of cattle. “The idea is for the donkeys to bond with the cattle.” If you have too many donkeys in a pasture, they may separate into their own “donkey herd” and may not protect the calves.

As for coyotes, the FWC said there’s no population estimate for coyotes in Florida, but they’ve been spotted in all 67 counties, and in every state but Hawaii, even on beaches. … “It turns out, coyotes are fairly strong swimmers,” Thompson said. “Coyotes can thrive in urban, suburban, and rural areas because they’re adaptable.”

Because of their diet and hierarchy in the food chain, coyotes can thrive and spread in practically any area. According to the FWC, coyotes eat anything they see, including small domestic animals, fruits, seeds, rodents, and “even garbage.”

Thompson said as part of a natural migration to the eastern United States, modern coyotes began arriving in northwestern Florida in the 1970s. Ultimately, the goal is to be able to coexist with coyotes in the Florida area.

The FWC says coyotes are helpful in maintaining balanced ecosystems by controlling the populations of rodents and smaller predators, such as foxes, opossums, and raccoons, which naturally occur in higher densities and can quickly overpopulate areas. Coyotes live in urban, suburban, and rural areas in Florida. The average Florida coyote weighs 28 pounds, and its coat colors range from gray to rusty brown.

The long-eared equines have keen eyesight and can see well at night, making them the perfect alarm system for a cattle operation.

Taylor Davis, Livestock and Natural Resources Extension Agent for Highlands County, explained in her blog, “This is especially important when coyotes are in the area at night. Donkeys instinctively are weary of dog-like species so coyotes fall under that umbrella. When feeling threatened, a donkey will bray very loudly and attack with their teeth and hooves for protection.”

Coyote size varies, but they are usually as big as a medium-sized dog (usually 2 to 37 inches from head to tail head) and weigh around 20–50 pounds.  Their coats are usually gray, white, tan, or brown with bush tails.

However, Florida law requires captured coyotes be killed; coyotes cannot legally be relocated to public land. The trapping and killing of coyotes is not recommended by the Animal Rights Foundation of Florida because once one is killed off, new coyotes move into those areas to replace them.