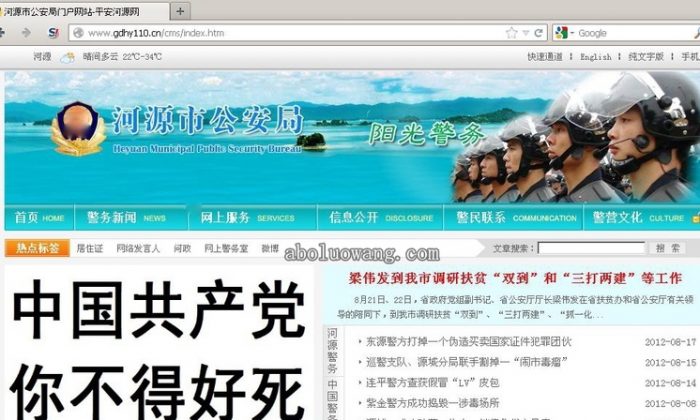 Screenshot: A message on the hacked website of the Heyuan City Public Security Department, in Guangdong Province, says “the Chinese Communist Party deserves a terrible death.” The website was hacked from between Aug. 22 and Aug. 27, when it was taken down and repaired. (Aboluowang.com)
China

The slogan “the Chinese Communist Party deserves a terrible death” appeared in large characters on the homepage of the official website of the Public Security Bureau in Heyuan City, Guangdong Province sometime between Aug. 22 and Aug. 27 before the website was taken offline and repaired.

The PSB is usually the agency that monitors and censors the Internet, blocking politically sensitive content and cracking down on dissidents. Netizens were pleased that the boot had been put onto the other foot, albeit briefly, with the attack.

A series of hackings of Chinese regime websites has taken place over the last six months; analysts see it as an expression of resistance toward the Party’s repressive human rights policies, abuses, and incessant censorship.

“Well done. Special thanks to these righteous hackers for their support of ordinary Chinese people,” one netizen wrote after seeing a picture of the hacked website.

Many other Chinese regime websites at different levels have been attacked by anonymous hackers, including with slogans like “Bring down the Communist Party.”

“I did not have a good impression of cyber hackers, but I now have come to realize that they are actually quite nice,” wrote a reader in the comment section of a Chinese Epoch Times article on the topic. “The more the better.”