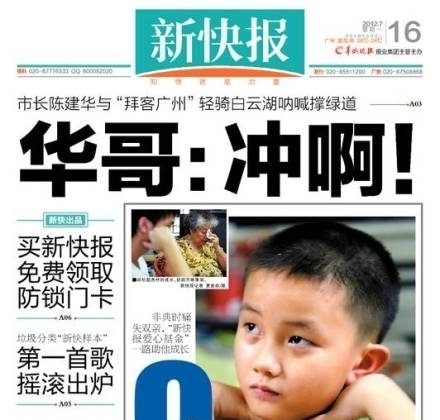 By John An and Rona Rui
Print

Guangdong Province has often been described as a laboratory for political reform in China, but on Monday one of the province’s newspapers was given an old fashioned jolt of repression that was all the more severe for seeming arbitrary.

The New Express Daily (Xinkuibao) was restricted in what it could cover and its editor-in-chief was purged. Xinkuibao employees were notified that the paper would no longer cover any subject matter not originating from Guangdong, including telephone interviews, according to a news update on Sina.com.

Xinkuibao’s July 16 edition was a shadow of its former self. It contained no commentaries, domestic or international news, and longstanding sections like Depth, Great Way, and Opinion Weekly were also removed. It only covered local news, sports, and entertainment.

When Guangzhou City municipal deputy for the Municipal People’s Congress, Zeng Dexiong, heard about the discipline meted out to Xinkuibao, he blogged, “If it’s come to this, what will be left of the newspaper?”

Microbloggers claimed that the paper’s punishment was caused by the publication of a political essay titled, “The Years the Politburo Members’ Educated Youth Settled in the Countryside and Merged With Peasants to Farm for a Living.”

No one could say clearly, though, why that essay had offended authorities, except that it discussed Xi Jinping and Li Keqiang, the presumptive next head of the CCP and next premier, respectively. With their ascension to power expected to come in October at the 18th Party Congress, discussing them is considered a sensitive topic. However, other newspapers carried the same article and were not punished.

Someone identifying him or herself as A Southern Metropolis Daily employee responded, “Take a look at Xinkuibao, and you will understand.”

During the 19th anniversary of World Press Freedom Day, on May 3, commentator Huang Xiuhui wrote an article titled, “Chinese Journalists Lose All Dignity,” in which he described how Chinese journalists feel about not being able to report the truth.