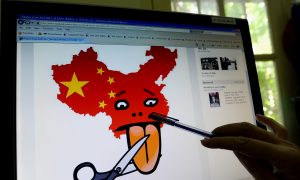 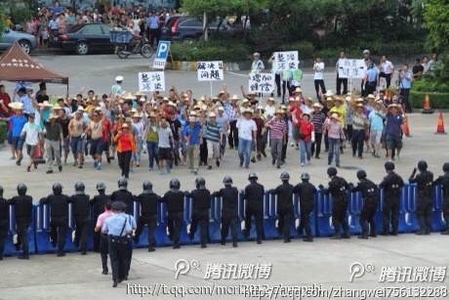 During an anti-terrorism drill conducted by the Guangdong Jiangmen police department on June 30, actual petitioners who were seeking financial compensation or environmental reform were treated as "terrorists." (Weibo)
China

During an anti-terrorism drill late last month, Chinese police practiced using as “terrorists” actual petitioners who were seeking redress for a variety of civil rights abuses. The general public was not amused.

In a report by Southern Metropolis, photos taken of the Guangdong Jiangmen police department’s June 30 anti-terrorism drill shows a crowd of people holding large signs that say: “Environmental Reform,” “I Want to Be Healthy,” “Solve My Problem,” “Increase Compensation.”

A netizen on Tencent Weibo, a Twitter-like service, commented: “The Chinese Communist Party is imagining ordinary citizens as their enemies! This is really terrifying. No wonder they don’t resolve any of the issues raised by civil and human rights petitioners. Instead they try to solve the issue of people petitioning. It turns out, civil and human rights petitioners are the same as terrorists in the eyes of the Communist Party’s police.”

Another Weibo user said: “The Chinese Communist Party treats unemployed workers, petitioners, and other common citizens as enemies. (I) finally know who the terrorists are in the eyes of the authorities. This is extremely shameless! The police is now the tool used by the authorities to control the general public; the drill was meant to threaten the public.”

According to Dong Liwen, an associate professor at the Department of Public Safety of Taiwan’s Central Police University, in 2006 mainland China officially published 87,000 cases of large-scale protests or riots, but then decided to stop publishing this data. However, civil groups estimate the current number to be over 200,000 every year, with the majority being related to financial compensation issues.