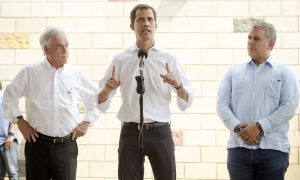 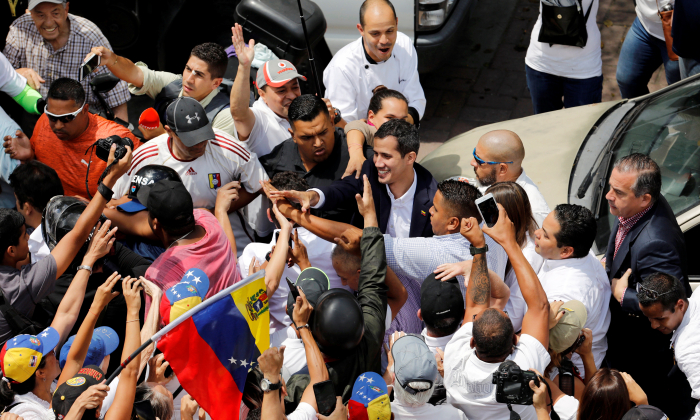 Venezuelan interim president Juan Guaidó cleared customs and returned to his country on March 4, in defiance of the threat of arrest by the regime of illegitimate socialist dictator Nicolas Maduro.

“Already in our beloved land! Venezuela, we have just passed migration and we will mobilize where our people are!” Guaidó wrote in Spanish on Twitter. “We enter Venezuela as free citizens, no one tells us otherwise.”

Guaidó, who is recognized by more than 50 nations as the legitimate leader of Venezuela, kept the details of his return under wraps. He had called on Venezuelans to take to the streets and protest the Maduro regime on March 4 and 5, and is expected to attend the protests.

“Guaido’s safe return to Venezuela is of the highest importance to the U.S.,” Vice President Mike Pence wrote on Twitter, minutes before Guaidó announced his return to Venezuela. “Any threats, violence, or intimidation against him will not be tolerated & will be met with swift response. The world is watching.”

“Any threats or acts against his safe return will be met with a strong and significant response from the United States and the international community,” he wrote on Twitter.

Guaidó had called on Venezuelans to take to the streets at 11 a.m. on March 4 to increase internal pressure on Maduro to surrender control of the government.

Guaidó landed at 12:20 p.m. on March 4 at the Simon Bolivar International airport in La Guaira, less than an hour’s drive from the Venezuelan capital, Caracas. Video footage from the scene shows a crowd of supporters greeting Guaidó as he walks to his car.

In Caracas, crowds of Guaidó supporters flooded the streets ahead of his arrival.

According to Sen. Marco Rubio (R-Fla.), the Maduro regime had blocked a major highway connecting Caracas to the airport.

Guaidó left Venezuela for Colombia last month to help convoys of international aid cross into his country. The aid was met with blockades, violence, tear gas, and even bullets. Maduro’s security forces killed six people during the clashes.

According to witnesses, operatives aligned with Maduro set fire to at least two trucks loaded with food and medicine destined for impoverished Venezuelans.

Maduro, whose socialist policies have crippled the once oil-rich nation, denies there is a crisis. Nine out of 10 Venezuelans live in poverty, while more than half go hungry every day. Faced with images of people eating scraps from the back of a garbage truck last week, Maduro cut short an interview with journalist Jose Ramos, detained the crew, and seized recording equipment and cellphones.

Only a handful of current and former communist regimes continue to back Maduro, including China, Russia, North Korea, and Cuba; U.S. officials continue to point out that Maduro is a puppet for the communist regime in Cuba. More than 90,000 Cuban proxies work in Venezuelan government and state-owned enterprises. Meanwhile, more than 20,000 Cuban security force personnel aid the police state in Venezuela.

“Cuba’s role in usurping democracy and fomenting repression in Venezuela is clear,” Bolton said. “That’s why the U.S. will continue to tighten financial restrictions on Cuba’s military and intel services. The region’s democracies should condemn the Cuba regime.”

After the Maduro’s forces blocked the aid convoys, Guaidó proposed that “all options be kept open” to topple Maduro.

“President Guaido safely returned to Venezuela today,” Bolton said on Twitter. “The United States fully supports Guaido and the National Assembly. His safety must be guaranteed. The world is watching.”

Maduro’s regime has jailed dozens of opposition leaders and activists for seeking to overthrow Maduro through violent street demonstrations in 2014 and 2017, including Guaidó’s mentor, Leopoldo Lopez, who remains under house arrest.

On March 3, Guaidó said the transition to a new government would be a “long and difficult process.”

He has offered future amnesties to state officials and soldiers, though the military has largely remained loyal to Maduro, despite Colombia’s migration agency reporting several hundred desertions since Feb. 23.