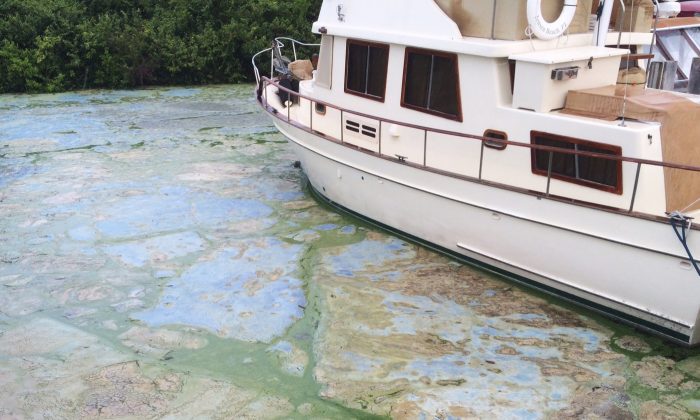 Algae covered water at Stuart's Central Marine boat docks is thick, Thursday, June 30, 2016, in Stuart, Fla. Officials want federal action along a stretch of Florida's Atlantic coast where the governor has declared a state of emergency over algae blooms. The blue-green algae is the latest contaminant in yearslong arguments over water flowing from Lake Okeechobee. Lawmakers say a southwest Florida county should be added to the state of emergency declared over an algae bloom on the Atlantic coast. (AP Photo/Terry Spencer)
US

A “guacamole-thick” muck of blue-green algae is contaminating Florida waters along a stretch of beaches along Florida’s “Treasure Coast.”

Residents have called the algae “horrible and disgusting,” and say that it smells like cow manure. The contaminant is also a deterrent for families who were planning to visit the Florida beaches for the holidays.

Florida Gov. Rick Scott declared counties in the region under a state of emergency due to the algae booms. On Wednesday, Scott extended the emergency declaration to “Lee and Palm Beach Counties.”

Martin and St. Lucie Counties are still under the state of emergency, he said.

The arrival of the algae is due to freshwater flows in the area, an operation controlled by the Army in order to keep lake-levels at a certain height. The algae is the latest contaminant featured in year long arguments over water flowing from Lake Okeechobee, the largest body of freshwater in the state.

Scott blames the federal government for releasing water from Lake Okeechobee in order to protect a failing, decades-old dike.

“When you try to reverse 75 years of diking and draining, that takes time,” Florida Senator Bill Nelson said in response to the question of why more hasn’t been done to fend off the algae during a recent tour of the St. Lucie River.

Measures have been taken in countering the algae. In a statement, the Florida Department of Environmental Protection announced they have launched a toll-free Bloom Reporting Hotline for residents to report the algae blooms online.

Meanwhile, the U.S. Army Corps of Engineers Jacksonville District said they will reduce the amount of water flowing from Lake Okeechobee beginning this weekend, according to a press release on June 30.

“It has been a challenging year for south Florida,” said Col. Jason Kirk, U.S. Army Corps of Engineers Jacksonville District Commander, in the statement.  “Our water managers have dealt with such large quantities of rain and runoff entering the lake that it would cover the entire state of Delaware in two feet of water.  However, after visiting with local elected officials in Martin County yesterday and viewing the algae first hand, we felt compelled to take action, even though we need to remain vigilant in managing the level of Lake Okeechobee.”