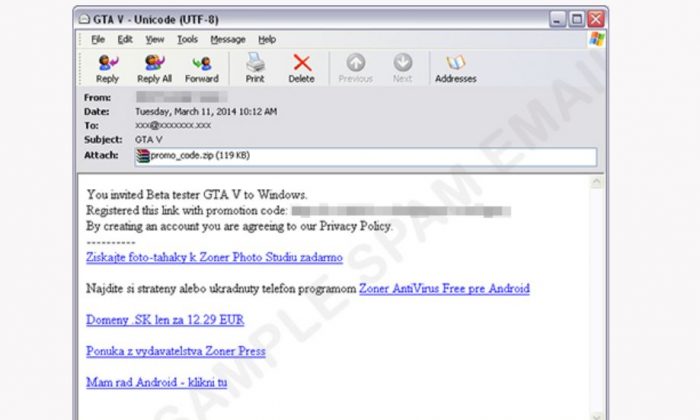 “Grand Theft Auto V” for the PC has not been commented on by RockStar and yet there’s a scam email campaign claiming there’s a “GTA V” beta test. (Trend Micro screenshot)
Gaming

“Grand Theft Auto V” for the PC has not been commented on by RockStar and yet there’s a scam email campaign claiming there’s a “GTA V” beta test.

The email only has text, it doesn’t have any official graphics, and it contains a number of grammatical errors–hallmarks of scams.

“You invited Beta tester GTA V to Windows. Registered this link with promotion code … By creating an account you are agreeing to our Privacy Policy,” the email reads.

It then has an attached .zip file that has malware application,“Your promo code in app rockstargames.com,” which then opens up a backdoor, says Trend Micro.

“Rockstar Games’ latest offering for the videogame industry, open-world crime simulator Grand Theft Auto V, came out several months ago for consoles to fanfare and anticipation. Unsurprisingly, people have been waiting for the PC version, despite Rockstar Games being very mum about its release date (or even its existence),” Trend Micro, a security company, wrote this week.

“This uncertainty did not stop cybercriminals from taking advantage of the pre-release publicity. We recently found a spam campaign making the rounds; this one claims that the user has been invited to the GTA V PC beta test,” it continues.

Other than malware, Trend Micro says the “second half are links written in Slovak, leading to several sites, one of which is a phishing site.”

“As always, we remind users to always be vigilant and alert when it comes to spammed mails such as these. Make sure to check valid and reputable news organizations/websites first before clicking on anything that seems too good to be true. If possible, seek verification from first-party sources (in this case, Rockstar Games). It saves everyone a lot of wasted time, effort and hassle,” Trend Micro concludes.

Regarding “GTA V” for the PC, there’s been only rumors, including one that says GameSpot posted a PC version of the game on its website before taking it down. It had a June release date, but this hasn’t been confirmed.

There hasn’t been any updates or recent rumors as to whether the game would be released for the Xbox One or PlayStation 4. Currently, “GTA V” is only on the Xbox 360 and PS3.

A Change.org petition to get the popular game to the PC has generated more than 670,000 signatures.