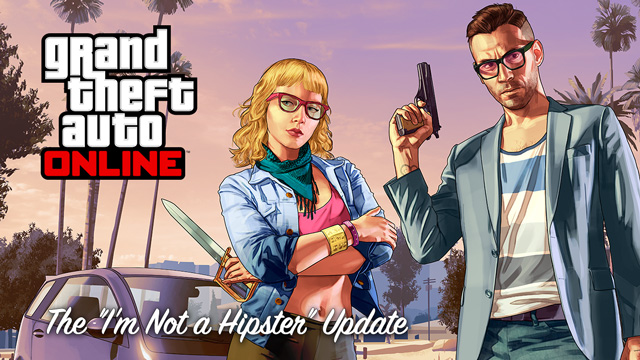 Grand Theft Auto V for the PC, Xbox One, and PlayStation 4 may have been pushed back to 2015, according to reports this week. (Rockstar)
Gaming

“Grand Theft Auto V” has not yet come out with its much-anticipated Heists DLC, but Rockstar on Tuesday instead came out with the “I’m Not a Hipster” update.

According to reports, the Heists patch is believed to come out in a few days. Early reports said the update would be out in the “spring,” and summer officially starts in a couple of days.

Rockstar on Tuesday issued a press release about the “Hipster” update.

The update has a seven new vehicles, which focus on “classic nostalgia” cars and “environmentally conscious” vehicles.

Also, the game introduced a Vintage Pistol and an Antique Cavalry Dagger.

“Along with today’s update, gear up for 12 new Jobs across an assortment of game modes, including Races that provide showcase opportunities for these new retro rides, a Deathmatch in Puerta Del Sol, two new Captures and more. There are also three new Gang Attacks in Chumash, East Vinewood and Mirror Park,” Rockstar also wrote.

The update also introduced a few tweaks to the Online gameplay, including 10 new cars being added to the southernsanandreassuperautos.com website, black window tint, new player celebrations, and it made some fixes.

“This update also includes a host of other adjustments, game tuning and exploit fixes,” said Rockstar.

A support thread said that a longstanding problem that allowed players to be charged insurance if their vehicle was destroyed by another player who doesn’t have enough GTA$ is fixed.

The support thread can be accessed here.

In recent days, there’s been complaints about game exploits. Here’s the full list from the support thread: