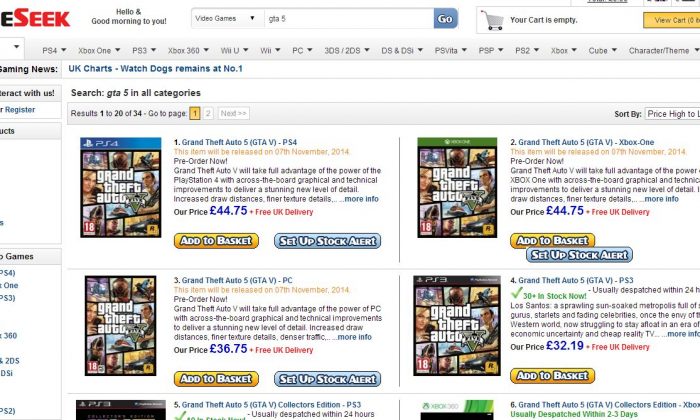 “Grand Theft Auto V” for the PC, PlayStation 4, and Xbox One might be out Nov. 7, 2014. Or at least, that’s what one retailer posted on its website a couple days ago.

GameSeek indicates that the game will be released Nov. 7 for all three platforms.

Last month during the E3 conference, Rockstar confirmed “GTA V” would be coming to the PC, Xbox One, and PS4. It didn’t give a specific release date, merely saying it would be out in the fall.

The next-gen version of the game will take advantage of the new systems’ graphics capabilities and will have other features. The PC version will also likely feature a robust modding community, which tends to be the case with popular games on that platform.

The listings might just be placeholders, however, meaning the date and prices could be subject to change.

GameSeek is also based in the United Kingdom. Usually North America and Europe have different release dates.

A few weeks ago, PC Gamer and a few other websites posted screenshots of a Danish retailer showing the PC version of “GTA V” coming on Nov. 14, which is also on a Friday. A few days later, the date was taken down and replaced with a Dec. 31, 2014 date.

Recently, a comparison video of the PS3 and PS4 versions of “GTA V” was uploaded, showing the upgraded graphics.

The video comparison was compiled by Eurogamer and Digital Foundry. “Signs, building facades, roads, mountains, vehicles, tree trunks and more all appear to feature higher-resolution artwork,” reads a post. “More importantly, texture detail appears to be retained at a much greater distance now, with increased draw distances evident on shots that stretch out into the difference.”