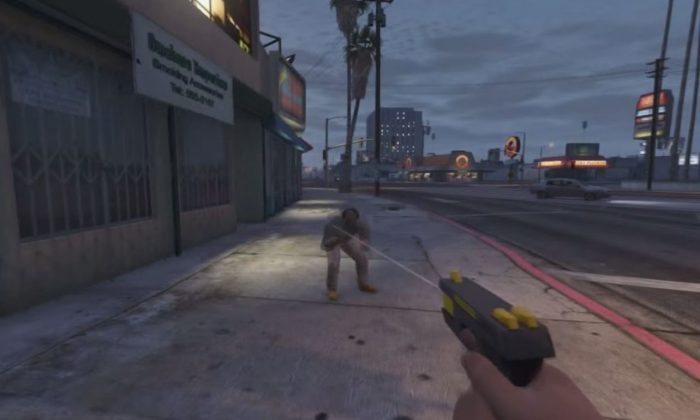 “Grand Theft Auto V” will be out for the PC, Xbox One, and PS4 during the fall, but one modder has shown off what it would be like to have a “GTA” first person shooter.

The user, XBLToothPik, posted a couple FPS “GTA” videos over the past week. According to CVG, the modder uses a custom-modden Xbox 360.

As the website notes, “But don’t be disheartened if you want to try it out – one suspects that the PC version of GTAV, which is due for release this year, will introduce a huge volume of such mods.”

The videos come as filmmakers created a real-life version of the original game trailer.

The real-life trailer was shot by ZapruderTweets in Madrid, Spain. “Ever wondered how a Grand Theft Auto movie would look like? A real life parody by Zapruder Pictures based on the GTA V first Trailer,” the filmmakers said.

They’re also looking to create a “Red Dead Redemption fan film” that would be shot in Almería’s West Studios, or where “The Good, the Bad and the Ugly” and “Once Upon a Time in the West” were shot.

Over the holiday weekend, Rockstar is doing an event to celebrate the 4th of July.

“Get ready to light up the skies with your all-new Independence Day Special fireworks, stars-and-stripes tees, and monster truck mayhem in a special 4-day Social Club Event this weekend, Thursday July 3rd through Sunday July 6th. San Andreas will be celebrating the birthplace of freedom with big RP & GTA$ bonuses, patriotic discounts at Ammu-Nation, giveaways and lots more – all as part of the Grand Theft Auto Online Independence Day Event Weekend,” the company said in a release.