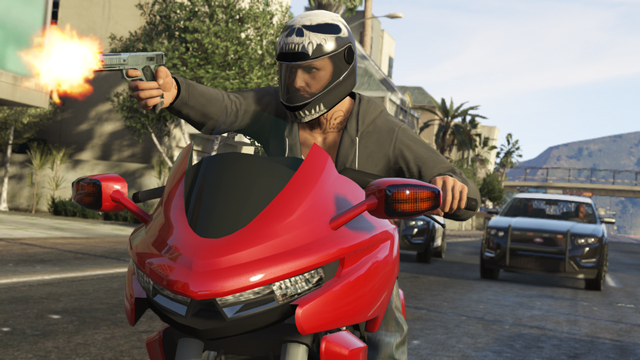 In the past week, there’s been a number of rumors about GTA 5’s release date on the PC, Xbox One, and PS4.

First, Rockstar recently clarified that the game won’t be delayed (or canceled) for the PC as some reports were claiming.

A Rockstar rep said, “I’m also looking forward to the PC release. However, this release date has not changed.”

The game is scheduled to come out in the fall of 2014, although no specific release date has been confirmed.

In the past, Rockstar has been secretive about release dates. The company didn’t even confirm the PC and next-gen GTA 5 versions until June. Meanwhile, there’s been no word on the hotly anticipated Heists DLC that was announced when the game came out a year ago.

Another rumor posits that GTA 5 will be released Nov. 18, 2014 (Tuesday), in North America. VG247 posted a screenshot of a Newegg listing for the game, showing the date for the PS4, Xbox One, and PC.

And a day before that, UK distributor Gem Distribution had a post which said the game would be out Nov. 14 (Friday).

Last month, another UK retailer and an Amazon website said the came would come out Nov. 7 and Nov. 14. Generally, games in North America are released on Tuesdays and Europe and UK releases are on Fridays.

GTA Online will also get those enhanced features.

Rockstar has sold more than 34 million copies of the game, generating about $800 million the first day it came out.