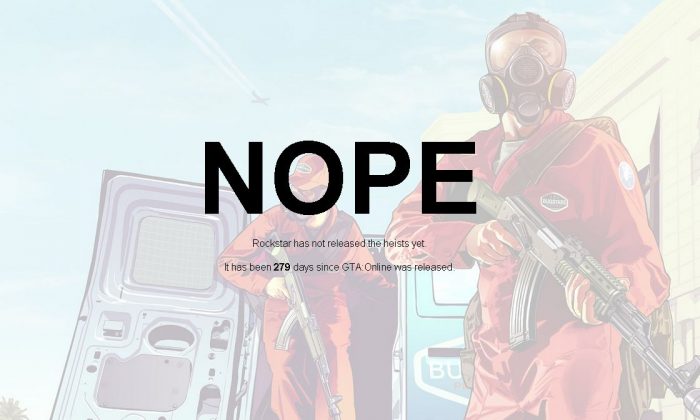 A “Grand Theft Auto Online” player responded to what Rockstar said about delaying the Heists update.

The user set up a website, AreTheHeistsThereYet.com, which shows the days since “Grand Theft Auto V” was released, according to CinemaBlend.

It’s been 279 days since the game came out, and Rockstar hasn’t released Heists yet–much to the chagrin of many players. On Reddit, the user expressed his disappointment in saying: “Out of boredom and frustration that the GTA:Online heists are still not out yet, I created AreTheHeistsThereYet.com .”

Rockstar confirmed to several media outlets that Heists would be delayed, while issuing an apology over the matter.

“We are very sorry for the delay, and are working hard to bring them to you as soon as we can. Please know that we are focused as always on making the best possible content for you to play and we are thankful to all of you for your patience, understanding, and support,” Rockstar said, adding that it’s taking “more time to create” than what was expected.

Since then, the company has released the “I’m Not a Hipster” and “Independence Day” updates.

A few days ago, the Official Xbox Magazine website reported that a YouTube user leaked details of Heists through YouTube. “Prison van rescue – Criminals intercept a noose van driven by NPCs and free the gang member then take him back to the gang house. 16 cops and 16 criminals can join the mission. Opens at rank 5 and is triggered by phone call,” reads a description of one of the missions .

Over the weekend, Rockstar held its Independence Day event, which provides a boost to GTA$ and RP. “Demonstrate your exceptionalism and own the road from sea to shining sea with two new star spangled rides, the Sovereign motorcycle and the super-sized Liberator monster truck. And protect your rights the same way our Founding Fathers did with the latest addition to Ammu-Nation’s antiques collection, the high-powered Musket… or channel your inner Jack Howitzer with the spectacular Firework Rocket Launcher,” it said in a release.