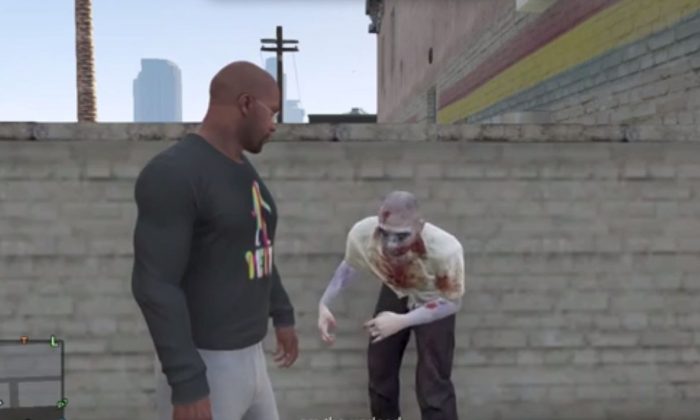 He cited a well-known modder for his information.

DomisLive says that “judging by the source code, it does SP, which means single player, but you never know, it could come to multiplaayer.” He said that Rockstar is starting to build up its casino and the code for zombies.

With Halloween less than three months away, it could be possible to see Rockstar come out with the DLC a month before.

“It may actually come out before Heists,” DomisLive said.

He also showed a billboard that showed a drug called “Zombix,” with the tagline: “Go straight for he head,” which might reference the Dead Rising series. Also, in many zombie movies or in AMC’s “The Walking Dead,” a headshot is required to kill a zombie or they’ll keep coming back.

He also said the billboard indicates that the zombie DLC might come to multiplayer.

Previously, DomisLive leaked content showing that doors will be added to casinos likely in the near future. He didn’t elaborate much on it but added that it appears the casino DLC is coming out soon.   A modder, he said, “was able to find the spawn points for the doors and was able to spawn in the exact doors for the casino,” meaning that new content is coming.

Meanwhile, Rockstar announced on its newswire that starting Friday until Sunday, players can get double RP.

“Beginning tomorrow, August 1st and running all weekend long through midnight eastern on Sunday August 3rd, get 2X RP in GTA Online. All Jobs and other RP-gaining activities like Gang Attacks, Hold Ups, and Import/Export to name a few, will earn you double RP,” the company said.

It added: “This will also be your last chance to pick up the limited-time Independence Day Special content, like the Liberator monster truck, Sovereign motorcycle, Musket and assorted patriotic apparel – so make sure to grab these items by Sunday.”