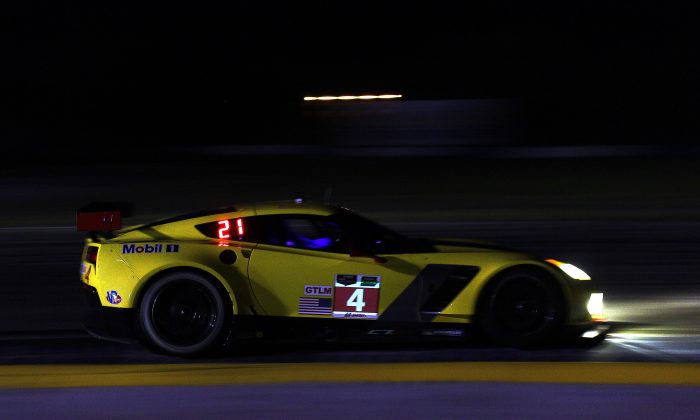 The Corvette Racing C7.R (here in action at Sebring 2014) battled hard against the #97 Aston through the early-morning hours at the Le Mans 24 race at Le Mans France, June 14–15, 2014. (Chris Jasurek/Epoch Times)
Motorsports

GT Battle Lights Up the Night at Le Mans

It’s two a.m. on Saturday night in central France—but no one in the vicinity of Le Mans is sleeping.

The 82nd Le Mans 24-houir race is nearing halfway, and up front, Toyota and Audi are locked in a tactical battle, with the the #7 Toyota TS 040 and the #2 Audi R18 e-tron quattro the only cars still on the lead lap.

In LMP2, the #35 Oak Racing Ligier-HPD has thirty seconds on the #36 Signatech Alpine-Nissan and a minute on the #46 Thiriet/TDS Ligier-Nissan.

This is the essence of endurance racing: cars, crews, and drivers fight fatigue, strive to perform as cleanly and precisely as possible, and add up a second here or there, hoping that in twelve hours those stolen seconds will add up to a lea—or that the competition will make a costly mistake, or break.

GTE-Pro is the anomaly—a pitched battle between cars contesting every inch of pavement. The battle started as a two-way fight between Toni Vilander in the #51 AF Corse Ferrari 458—the pole-winning car—and the #97 Aston Martin Vantage V8 of Bruno Senna.

After several laps of Vilander filling Senna’s mirrors, Tom Milner in the #74 Corvette racing C7.R caught the pair, and when Vilander made a play to pass Senna, Milner pushed past into second in class.

Vilander chased Senna and Milner for a few laps watching each lay down hi fastest lap of the race, and decided to ease of, to let the other two fight, and possibly take out one another.

Senna and Milner kept for 20 laps until Senna pitted on lap 170—and will likely take up the fight again, after Milner stops for fresh tires.

After pit stops, Bruno Senna pulled a gap on Milner—and Toni Vilander caught back up with the Corvette. The Ferrari driver spent the next stint staring at the Corvette’s tail lights, testing at different corners—but Tom Milner refused to get rattled.

The Corvette had good brakes, the Ferrari got a good launch out of corners; both cars were quick, both drivers were motivated, and neither could break the will of the other.

Finally on lap 182 an outside force intervened in the form of a prototype which caught up to the Ferrari in the first chicane. Vilander was forced wide, but Milner got through cleanly and opened a gap all the way to the second chicane, where another passing car once again held up the Ferrari.

Vilander pitted next time around, but he had lost a valuable opportunity; while his fuel load was lighter than the Corvette’s he had the chance to make time but since he couldn’t get by, he lost the chance.

Vilander handed off to co-driver Giancarlo Fisichella, who rejoined on fresh tires and with a full tank, a lap down on the GT leader Bruno Senna and well behind the Corvette.

It won’t be many laps until the first to cars in class will have to pit—and the battle will be rejoined.

The 82nd Le Mans 24 Hours is being broadcast live to the finish on Fox Sports TV, and Radio Le Mans.com, with Live Timing and Scoring at http://live.fiawec.com.