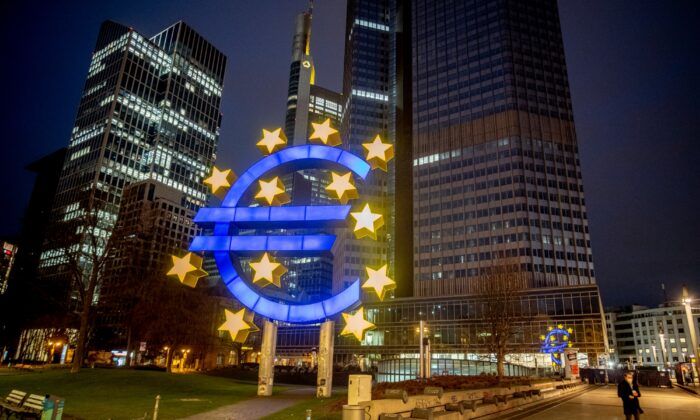 A man walks past the Euro sculpture in Frankfurt, Germany, on March 11, 2021. (Michael Probst/AP Photo)
Businesses in COVID-19

FRANKFURT, Germany—The European economy slowed noticeably at the end of last year as surging COVID-19 cases driven by the omicron variant piled on top of supply shortages and rising energy prices that dented consumer purchasing power. The result: An economic winter of discontent that may not lift until later this year.

Much of the slowdown came in Germany, Europe’s largest economy, where difficulty getting parts held back its export-heavy manufacturing economy. France, Spain and Italy showed stronger growth.

In the 19 countries that use the euro, growth in the last three months of 2021 came in at 0.3 percent, the European Union’s statistics agency said Monday. That compared with growth of 2.2 percent in the July-September quarter.

For the year, it was 5.2 percent, underlining how Europe’s economic recovery from the pandemic has moved slower than the rebound in the United States, where 2021 growth was 5.7 percent, U.S. growth was boosted by what economists say was a comparatively larger share of federal stimulus spending than in Europe.

Europe’s economy is “almost exactly back to its pre-virus size,” but that leaves it “way behind” the U.S., which reached that milestone last year and where output is now more than 3 percent above what it was in late 2019, said Jessica Hinds, senior Europe economist at Capital Economics.

A major reason for Europe’s slowdown was spiking COVID-19 cases that led to new and shifting restrictions and deterred cautious consumers from spending money on restaurants, hotels and entertainment. That comes on top of clogged supply chains, which are leaving the eurozone’s export-oriented manufacturing sector unable to fill orders, and higher prices for oil, natural gas and electricity, which are weighing on businesses and consumers.

Businesses have shown more resilience in dealing with successive waves of the pandemic, helping keep the eurozone from falling into recession and limiting unemployment to 7.2 percent in the latest reading. But slower growth is compounded by higher inflation, eroding wage increases.

“This adds to a sizable squeeze in purchasing power for the consumer and dampens growth prospects,” said Carsten Brzeski, global head of macro at ING bank.

And the friction in Europe’s gears isn’t over yet. Growth “might weaken further” in the current quarter, according to economists at UniCredit bank.

Germany, usually a growth motor for the eurozone, shrank 0.7 percent in the fourth quarter and would slide into a shallow recession if growth is negative again in the first three months of this year. Two straight quarters of declining output is one definition of a recession.

No. 2 eurozone economy France, on the other hand, saw growth of 0.7 percent over the previous quarter, leaving the year’s figure at 7 percent. That is the strongest since 1969. The full-year figure was buoyed by strong consumer spending and services in the third quarter as many activities resumed during a lull in the pandemic.

Europe also faces uncertainty amid tensions over Russia massing troops on the Ukrainian border, raising fears of an invasion. Those fears have helped keep natural gas prices unusually high in Europe because Russia is a major supplier and the continent’s underground gas reserves are low. So far, Russia says it has fulfilled its long-term supply contracts, and analysts speculate that any sanctions imposed by the United States or the EU may seek to avoid directly targeting Russian energy.

In the meantime, the eurozone inflation rate has hit a record 5 percent, presenting a challenge for European Central Bank President Christine Lagarde when bank policymakers meet Thursday. Lagarde is expected to stick to her view that inflation is temporary and that the bank is far from raising interest rates, the usual antidote to rising consumer prices.