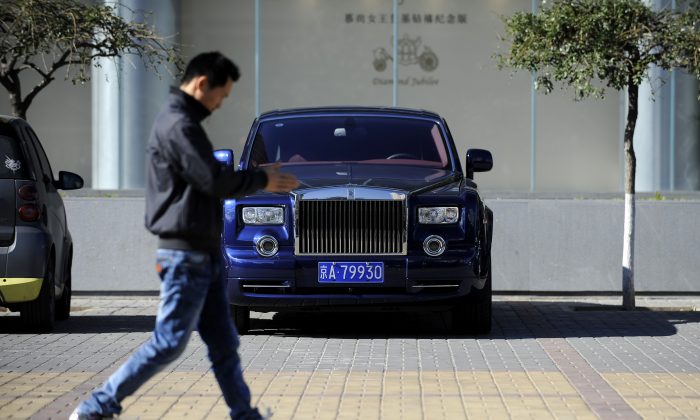 This picture taken on Oct. 31, 2012, a Chinese man walks past a Rolls-Royce outside an auto shop in Beijing. Only a quarter of wealthy Chinese are very confident in the Chinese economy. (Wang Zhao/AFP/Getty Images)
China

The growth in the number of Chinese millionaires has slowed down for the second consecutive year, and only around a quarter of those interviewed have strong confidence in the country’s economy, according to a survey released on Aug. 14.

Based on the GroupM Knowledge-Hurun Wealth Report 2013, the number of people in China with wealth exceeding 10 million yuan (approximately $1.6 million) grew by 3 percent to 1.05 million last year, while the number of super-rich–with assets worth over 100 million yuan (about $16 million)–grew by 2 percent to 64,500. Currently, one in every 1,300 Chinese is considered a millionaire, and one in every 20,000 is considered super-rich.

Beijing continues to be home to the highest number of wealthy people with an increase of 5,000 multimillionaires to 184,000 and 200 billionaires to 10,700, followed by Guangdong and Shanghai.

Tianjin saw the country’s fastest growth rate, while Zhejiang Province and Inner Mongolia dropped the most. Sixty percent of rich people are living in non first-tier cities, like Hangzhou and Ningbo, with an average of over 20,000 multimillionaires.

One-fourth of the people surveyed are very confident in the Chinese economy for the next two years. This is a decrease of 3 percent since last year, and around half the number from the previous year, which was 54 percent. There has been a 2 percent increase in those who are fairly confident to 66 percent.

In contrast, 9 percent have no confidence in the economy, which is an increase of 2 percent since last year, and the highest figure in the past three years.