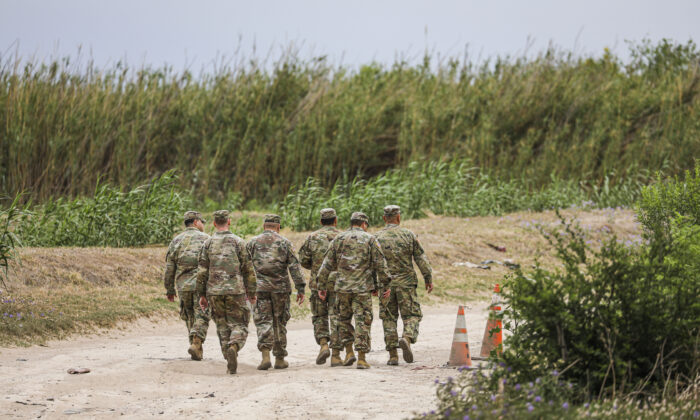 Two more Texas counties confirmed they have declared an invasion at the U.S.–Mexico border in recent days amid historically high illegal immigration.

The Parker County Commissioners Court unanimously voted this week to invoke a law to say that the United States and Texas are under invasion, local media reported.

Because of the significant presence of illegal immigration and drug trafficking, the declaration says it is “an invasion of Parker County, Texas, as the term ‘invasion’ is used in Article IV, Section 4 of the U.S. Constitution and in Article 4, Section 7 of the Texas Constitution.”

“I think we all know the border is a mess,” Parker County Sheriff Russ Authier told commissioners during the meeting ahead of the vote. “We see different aspects of it other than our partners who are on the border seeing the human side of the smuggling, trafficking of people. A lot of what we’re seeing here is the drug smuggling.”

The Atascosa County Commissioners Court separately declared the surge of illegal immigration an invasion on July 25. Judge Russell Wilson signed the declaration affirming the invasion at the border.

Kinney County Attorney Brent Smith told The Center Square that with the declarations from Parker and Atascosa counties, “the significance … cannot be overstated.” Kinney County and several other Texas counties issued similar declarations earlier this month.

“It clearly establishes that the border crisis impacts every county in the state and is not limited to those communities near the Rio Grande,” Smith also told the outlet. “The safety and security of every Texan is threatened by the federal government’s abandonment of its constitutional duty. I encourage every county in the state to acknowledge the crisis is an invasion. If Texans don’t save Texas, no one will.”

Earlier in July, Texas Gov. Greg Abbott signed an order authorizing the state’s National Guard and the Texas Department of Public Safety to apprehend illegal immigrants who cross the Mexican border into Texas and return them to the border. Unlike the counties, the Republican governor didn’t declare an invasion.

“While President Biden refuses to do his job and enforce the immigration laws enacted by Congress, the State of Texas is once again stepping up and taking unprecedented action to protect Americans and secure our southern border,” he said at the time.

A section of the Texas Constitution allows the governor to declare an invasion to protect the state.

“He shall be Commander-in-Chief of the military forces of the State, except when they are called into actual service of the United States. He shall have power to call forth the militia to execute the laws of the State, to suppress insurrections, and to repel invasions,” the state Constitution says.

Along the border, apprehensions have surged past 1.7 million so far in the current fiscal year—with three months to go, July data shows. Border Patrol agents between Brownsville, Texas, and San Diego apprehended 232,628 illegal border crossers in May, the highest monthly total in 23 years, officials have said.