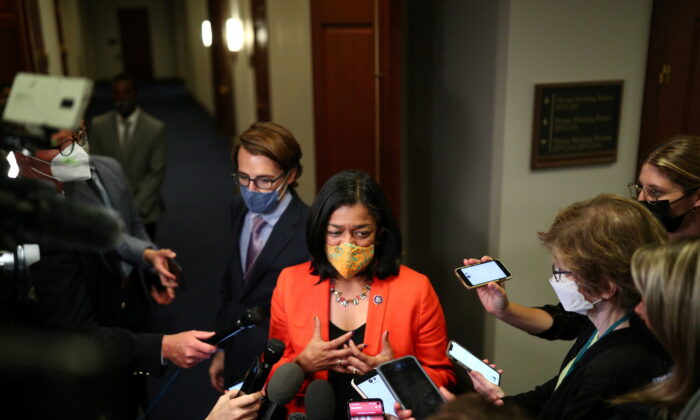 A growing number of Democrat lawmakers are publicly pushing for another stimulus package or a bill to replenish the funding to programs in the American Rescue Plan that was passed earlier this year.

Rep. Jamaal Bowman (D-N.Y.) said that because New York state has seen a rise in COVID-19 cases in recent days, he will introduce a new stimulus package.

“I’m going to push to get another package through Congress,” Bowman told The Washington Post.

Since the onset of COVID-19, Congress has passed bills worth around $6 trillion, including several packages with direct stimulus payments to individuals who qualify.

Sen. Kyrsten Sinema (D-Ariz.), meanwhile, also said she would push for her bipartisan legislation that would replenish the stimulus program.

“The Omicron variant is already affecting restaurants,” she told the paper, referring to a COVID-19 strain. “Even a small decrease in business can cause independent restaurants to close their doors. We saw this starkly at the beginning of COVID last spring … I think Omicron certainly complicates that.”

Health officials in South Africa and New York City’s health commissioner, in recent days, said that Omicron-related hospitalizations appear to be a fraction of hospitalizations that were seen during previous COVID-19 waves. So far, few deaths have been reported worldwide in connection to Omicron.

“I’m concerned that you’re going to have many, many vulnerable Americans, Americans with young children for example, falling between the cracks,” Sen. Ron Wyden (D-Ore.) told the paper, adding: “January looks like a tough month with respect to Omicron.”

Rep. Pramila Jayapal (D-Wa.) suggested that another COVID-19 stimulus package may be necessitated, arguing that Democrats wouldn’t need to push for more stimulus if President Joe Biden’s social and climate spending bill is passed. Sen. Joe Manchin (D-W.Va.), a key Democrat holdout, announced Sunday that he will vote against the measure.

“I think that the big thing COVID exposed is all of these gaps in our health-care system, in our child-care system, in our paid-leave system, and that’s what [Build Back Better] was about … so we don’t have these big gaps when these issues hit,” Jayapal told the paper.

Gene Sperling, a top economic adviser to President Joe Biden, recently said that the White House is monitoring the U.S. economic recovery and job market to determine whether his administration will throw its weight behind a new stimulus plan.

“As always, we’ll follow closely whether future developments would require some targeted resources,” he said.

Of concern, however, are recent reports indicating that consumer prices are spiking to the highest levels in decades. Earlier this month, the Bureau of Labor Statistics (BLS) reported that the Consumer Price Index (CPI), which measures inflation for consumers, rose 6.8 percent year-over-year—a level not seen since May 1982.

Rising inflation was cited by Manchin on Sunday as a primary reason why he wouldn’t back the social and climate package.

In a letter to Senate Democrats, Majority leader Chuck Schumer (D-N.Y.) wrote that the Senate will vote on the “Build Back Better Act, very early in the new year so that every Member of this body has the opportunity to make their position known on the Senate floor, not just on television.”