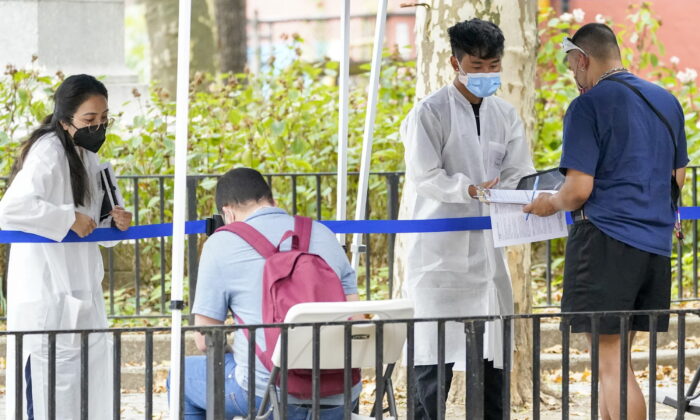 An increasing number of municipalities are declaring health emergencies over monkeypox, with Los Angeles and San Diego issuing declarations this week.

The Los Angeles County Board of Supervisors unanimously approved declaring a local emergency (pdf) over monkeypox on Tuesday. It came as health officials in the county said a child in Long Beach contracted the virus.

“The proclamation of local emergency is to help our county do all that we can to get ahead and stay ahead of this virus,” LA County Board of Supervisors Chair Holly J. Mitchell said.

Also on Tuesday, San Diego County declared a public health emergency for monkeypox, according to a declaration (pdf) signed by the county’s director of Public Health Services.

“The situation we face with monkeypox is fundamentally very different,” San Diego County Supervisor Nathan Fletcher said, referring to the contrasts between monkeypox and COVID-19. “We take it very seriously, but as I mentioned earlier it is exponentially less transmissible. We know more about it. We also have a vaccine at the start of it.”

Fletcher said that monkeypox is primarily “impacting our LGBTQ community,” echoing statements made by the Centers for Disease Control and Prevention and World Health Organization. Both agencies have said that homosexual males are the primary spreaders of the virus, which was mainly confined to west and central Africa before 2022.

But the supervisor also attempted to qualify his statement by saying that “we know it can spread to others,” according to local reports.

In Long Beach, located in Los Angeles County, officials confirmed a pediatric case of monkeypox. It’s not clear how the child contracted the illness.

“While news of a pediatric case may cause alarm, please remember that monkeypox is still rare, is much more difficult to get than COVID-19 and other common childhood illnesses, and is rarely dangerous,” Dr. Anissa Davis, the city’s health officer, said Tuesday.

Both declarations on Tuesday came one day after Democrat Gov. Gavin Newsom declared a public health emergency for the state of California.

“We’ll continue to work with the federal government to secure more vaccines, raise awareness about reducing risk,” Newsom said in a statement. California has received more than 61,000 vaccine doses and has distributed more than 25,000 doses.

The type of monkeypox virus identified in this outbreak is rarely fatal, and people usually recover within weeks. But the lesions and blisters caused by the virus are painful.