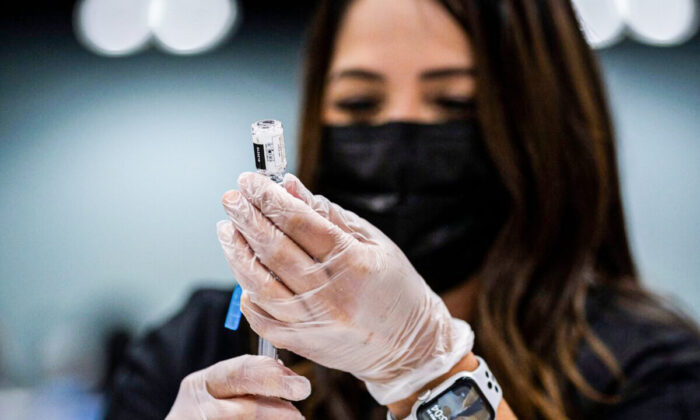 In what appears to be a growing trend nationwide, an increasing number of businesses and other organizations are mandating that workers, customers, or students receive a COVID-19 booster dose.

On Dec. 22, Danny Meyer, the CEO of the Union Square Hospitality Group and Shake Shack founder, told CNBC that starting “immediately,” his businesses “are going to be requiring that 100 percent of our staff members have a booster within 30 days of their eligibility.”

Numerous colleges and universities are also requiring booster shots for staff, faculty, and students—including Harvard, Dartmouth, Princeton, Stanford, Yale, MIT, Northwestern, Columbia, Amherst, and Emory. Most of the requirements are for when students are scheduled to return back to campus following the winter break.

All performers, staff, and audience members who attend New York’s Metropolitan Opera will have to show evidence they’ve received a booster dose before entering the building or attending a performance, according to the opera in a Dec. 15 press release.

Starting Jan. 17, “entry to the Met will be restricted to those who have received the booster shot, if eligible,” the press release stated. “Those not yet eligible will be able to continue to enter but must receive the booster shot shortly after they become eligible.”

New York City Mayor Bill de Blasio, a Democrat, said in a Dec. 21 news conference that he is considering mandating boosters as a condition for employment for city workers.

The NFL, meanwhile, will require staff, coaches, and other team members who interact with players to receive COVID-19 booster doses by Dec. 27, according to a recent memo that was sent to teams. Players aren’t affected by the league’s latest mandate, as their COVID-19 protocols are negated by an agreement the league has with the NFL Player’s Association.

The federal government hasn’t issued any mandates for booster shots. The White House issued executive orders and published rules that mandate full vaccination for federal contractor employees, federal employees, and health care workers who are employed at businesses that receive Medicare or Medicaid funding—although these orders are currently being challenged in court.

However, some officials, including governors, have said they want the definition of “fully vaccinated” to change to include having received a booster dose. That would mean that those who have received the Pfizer or Moderna vaccine would need to receive a third dose, whereas those who got the Johnson & Johnson shot would have to get a second dose.

Top federal officials, including the heads of the Centers for Disease Control and Prevention (CDC) and the National Institute of Allergy and Infectious Diseases, have told media outlets that they are mulling whether to consider someone fully vaccinated as having obtained the booster.

In November, the CDC signed off on a recommendation that all adults can either get Pfizer’s or Moderna’s booster, coming weeks after booster doses for the Johnson & Johnson vaccine were recommended by the agency.

Meanwhile, California Gov. Gavin Newsom announced on Dec. 21 he would mandate COVID-19 booster doses for all health care workers in the state.

“California will require healthcare workers to get their booster,” Newsom wrote in a Dec. 21 tweet.

“With Omicron on the rise, we’re taking immediate actions to protect Californians and ensure our hospitals are prepared,” he added, describing his Twitter post as a breaking update.

The Democrat governor’s office said he would make a more lengthy statement about the new requirement on Wednesday morning. Previously, Newsom had required all health care workers to get fully vaccinated—without a booster—by Sept. 30.