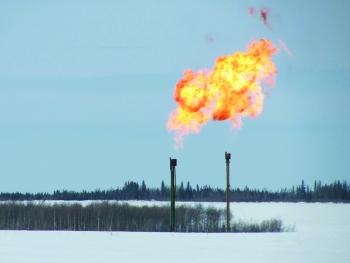 Twin flarestacks are cleaned through 'flaring' at a wellsite near Farmington, B.C., in March 2010. Flarestacks are a common site near homes in B.C.'s Peace region. (Courtesy of Ken John.)
US

Groups concerned about the effects of sour gas in B.C.’s Peace Country are calling for a public inquiry following reports of adverse health effects blamed on the gas.

“I’ve collected information from a lot of people in the area and they’re all talking about the same thing—headaches, nausea, and breathing problems,” she says, “In acute exposure with any of the toxins it can be fatal. There have been some rather acute exposures.”

The call for the inquiry from PESTS and the University of Victoria’s Environmental Law Centre is supported by the Northern Health Authority, local First Nations, and the Peace River Regional District, among others, says Hill.

The most recent gas leak occurred Feb. 6 when residents about 40 kilometres northeast of Peace River complained of a “rotten egg smell.” Shell Canada is now under investigation after the leak was traced back to their plant near Peace River, Alberta. The oil tank had been releasing sour gas for almost an hour before it was discovered.

In November 2010, oil giant EnCana came under investigation by B.C.’s Oil & Gas Commission (OGC), when one of their pipelines released dangerous toxins strong enough to kill a horse and injure a woman in the nearby village of Pouce Coupe.

“There has been no formal connection, no partnership between the Ministry of Health and the Minister of Industry in setting the standards, determining what is safe for those of us who are living surrounded by it,” she says. “There has never been one environmental impact assessment done, no acknowledgement of cumulative impact.”

Hardy Friedrich, a spokesman for the OGC, told the Globe and Mail that the agency looks out for public safety and has been corresponding with PESTS.

“The B.C. Oil and Gas Commission has an extensive program in place to ensure public safety, including site inspections, proactively managing towards compliance and taking the necessary enforcement actions,” he wrote in an email.

“In addition, inspectors also respond to complaints of odour or flaring as needed. In terms of specific health issues, those matters are addressed through Northern Health or the ministry, as appropriate.”

Hill says she was told by OGC commissioner Alex Ferguson that the agency has neither the mandate nor the expertise to follow up on the health implications of oil development.

A year ago, B.C.’s auditor general John Doyle released a report criticizing the OGC for failing to meet its responsibilities to the public. Doyle said the agency was failing to manage human health and environmental and financial risks associated with oil and gas resource development.

Hill says there were two dangerous gas leaks that affected the community over Christmas, one of which took four to five days to stop.

“Those events aren’t in the news. It’s like anything else—it seems it takes a fatality before anything happens,” she says, adding that the industry needs to consider the dangerous impacts not only of high-intensity bursts but prolonged, low-intensity exposure to the gas.

“We have smoke alarms in public buildings, and CO2 alarms, but we have no system to tell us whether or not the air is becoming toxic. You’ve got to realize that the setback allowable for a high pressure gas well and some of the facilities is 100 metres from our window.”

The community may have to brace itself for yet more development in the area, as EnCana recently announced a $5.4 billion joint venture proposal with PetroChina. The bid is currently under review by Industry Minister Tony Clement.

“The sense in the community is that this is going to continue and we’ve absolutely got to make sure that we’re safe and we’ve got a place where we and our families can continue living because the world wants our natural gas,” says Hill.

“Don’t get me wrong, we’re not against development, we just want it done in a safe manner that protects and respects us.”

According to the B.C. government’s budget forecast, natural gas royalties are expected to hit $365 million for 2010/2011.