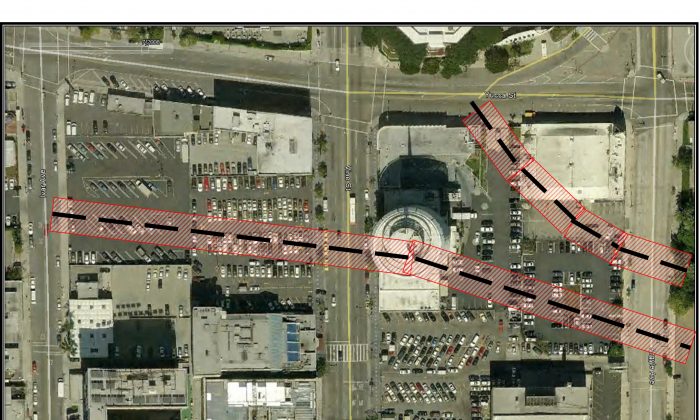 Map of Millennium site in Hollywood, Calif., showing faults and a 50-foot setback as of Jan. 8. (California Geologic Survey Fault Map)
US

LOS ANGELES—A project in Hollywood approved in 2013 may be built on a fault line, according to new maps. California law forbids construction on top of a fault. But until recently, the state had not made it a priority to map thousands of miles of faults across the state.

Attorney Robert Silverstein is representing 40 different community groups who sued the city of Los Angeles and a developer after the city approved the Millennium Hollywood Project, to be built north of historic Hollywood and Vine. The mixed-use development will cover 4.47 acres of land.

“The buildings that the City Council approved in July of 2013 were illegal,” said Silverstein. “Not only illegal, but endangered thousands of people’s lives.”

State geologist John Parrish warned Los Angeles officials that other maps and research indicated the Millennium Project was likely over a fault line.

“It definitely may impact development, but what that really means is it will enhance safety for the public,” Silverstein said.

Phillip Aarons of Millennium Partners argued that the map was not accurate and the project was not necessarily in a fault zone. “Millennium Partners has conducted such geologic and geotechnical site investigations on our sites already. Those extensive subsurface site investigations, which were performed on our site (including borings and subsurface exploration), found no evidence of an active earthquake fault on our property,” said Aarons in a statement released on April 1.

According to the company it planned to conduct “final definitive subsurface investigations” before applying for a permit.

California law prohibits constructing buildings used for human occupancy directly over or within 50 feet of an active fault line. When no updated fault maps exist, decisions are made based on the information available. As another layer of security, developers are required to conduct tests on a site for potential seismic activity before starting construction.

At the beginning of July, the California Geological Survey (CGS) began zoning the 25-mile Santa Monica Fault and further mapping the 10-mile Hollywood Fault. A preliminary map of the Hollywood Fault was released in January.

The Los Angeles Times estimated that 1,500 developed properties lie on the Hollywood Fault, according to the newly released map, and includes schools, hotels, homes, and landmarks such as the Capitol Records building.

“It is difficult to say what size earthquake will be caused by these faults, but it is safe to say that they could cause earthquakes magnitude 6 or greater, which can cause significant damage,” said Tim McCrink, the head of the CGS’s Alquist-Priolo Earthquake Fault Zoning Program.

The only way to avoid damage is to move a building away from a fault, something not easy to do in a city.

California state legislators passed the Alquist-Priolo Earthquake Fault Zoning Act in 1972, after the magnitude 6.6-earthquake in San Fernando in 1971 (also known as Sylmar earthquake). The earthquake caused the ground to slide as much as one yard in opposite directions, destroying buildings and killing around 65 people.