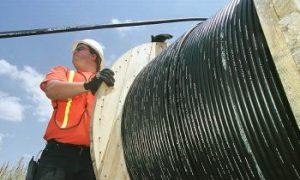 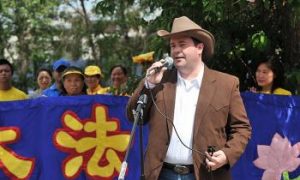 NEW YORK—The New York Immigration Coalition (NYIC) held a press conference today to kick off the final two weeks of their “Immigrants Vote!” campaign. For more than a decade, the umbrella policy and advocacy organization has helped more than 200 groups in New York state in their work with immigrants and refugees in New York.

Their coordinated efforts have been a success, with more than 280,000 new citizens being registered to vote. This year, with tight congressional races for state Assembly and Senate elections, their goals are to demonstrate the impact of that voting bloc, which already counts more than 1 million registered voters in New York, according to a new study by the Immigration Policy Center.

Today it is all the more important for immigrant communities to have a voice, as they, “like all New Yorkers, have been seriously impacted by the economic downturn and budget cuts,” noted Linda Sarsour, executive director of the Arab American Association of New York. “We have a vested interest in the outcomes of this year’s state and federal elections. We need leaders who will fight for us and our families.”

According to results from the 2008 New York City Voter Exit Poll, only about 10 percent of foreign-born voters reported being contacted by political parties and campaigns, roughly half the rate of their native-born counterparts. The Immigrants Vote! campaign, started in August, has been organizing voter education events, voter registration drives, workshops, and community forums. More than a dozen immigrant groups are conducting targeted voter outreach to reach infrequent voters and non-English speakers who are often overlooked by political parties and campaigns.

The campaign's final part includes “Get-Out-The-Vote” activities, consisting of door-to-door canvassing, phone banking, and mailings. “By providing bilingual materials, information about how and where to vote, and reminders to get-out-and-vote, our grass-roots efforts have a real impact,” explained Steven Choi, executive director at the MinkWon Center for Community Action.

In addition, NYIC sent questionnaires to New York’s gubernatorial candidates asking them to specify their past accomplishments helping immigrant communities, and what specific actions they intend to take if elected, regarding their policies on immigration reform, health care, education, housing, workers rights, and access to government and legal services.

Gonzalo Mercado, executive director of El Centro de Inmigrante, said: “It is important that immigrant communities be heard this November. This is an especially urgent time, what with Arizona's SB1070 law, similar proposals elsewhere around the country, and, here on Staten Island, the recent wave of hate crimes targeting immigrants. By getting out the vote, immigrant communities exercise their power to push for change.”