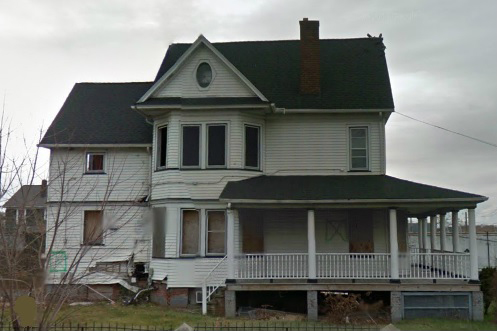 A screenshot, taken on Oct. 25, 2013, shows a home at 415 Port Richmond Ave., Staten Island, New York. The house, which has been abandoned for several years, was claimed as the home of Sandy evacuees. (Screenshot/Google Maps)
New York

NEW YORK—Two cases of fraud have been discovered among the 80 remaining households of Superstorm Sandy evacuees still living in hotels. The hotel program was established as an emergency measure for people made homeless by Sandy.

According to several evacuees, seven households were informed as early as Oct. 23 that the property they reported living in before Sandy was not damaged by the storm. The notice also said that they must move out of the hotel because of limited funding and strict program eligibility requirements.

Peter Gudaitis, chief response officer with New York Disaster Interfaith Services (NYDIS), said by phone on Oct. 25 that through due diligence, multiple red flags were raised over seven claims. NYDIS worked with the Red Cross, the Legal Aid Society, and the Coordinated Assistance Network database to check into the cases.

The hotel program, which has served over 3,000 New Yorkers displaced by Sandy, was previously managed by the city’s Department of Homeless Services (DHS).

DHS ended its program on Oct. 4, at which point NYDIS began managing the cases and assisting evacuees. Many evacuees are within days or weeks of securing permanent homes. NYDIS is a nonprofit organization that manages philanthropic dollars and acts as an intermediary for the Sandy Unmet Needs Roundtable, a place of last resort for people who need assistance.

Three households voluntarily left their hotel rooms before receiving the letter, two had red flags resolved and remain in the program, and two were determined to be “definitively fraud,” according to Gudaitis. NYDIS made a final determination that those two cases cannot demonstrate residency and had to leave the hotel program by Oct. 26.

According to Gudaitis, who would not disclose identifying details about the two cases, false addresses of residences prior to Sandy were provided to gain entry into the hotel program. One address was a vacant lot, and the other was an address for an abandoned house that hasn’t been occupied for years.

One of the cases cleared of suspicion involved a woman whose landlord said her home was uninhabitable after Sandy. In a pending court case over that residence, it is being argued that the landlord lied about damage to get residents to move out.

In the short three-week period that NYDIS has been assisting Sandy evacuees, the caseload has significantly dropped. The number of households still in hotel rooms has gone down from 101 on Oct. 4 to 80 on Oct. 25. According to NYDIS, that’s no accident.

“For those of us who manage nonprofit money, we do due diligence on clients,” said Gudaitis. He also said that the vast number of evacuees has been “deeply appreciative and cooperative.” Although he also characterized a very small percentage of evacuees as “difficult,” case managers acting as gatekeepers ensure an extra level of cooperation and proper use of funds.

NYDIS has been working with the Legal Aid Society, and disaster case managers at the Red Cross, Bronx Works, and Catholic Charities to determine the housing needs of the remaining evacuees. The speed at which NYDIS and related organizations are able to help evacuees find permanent housing is key.

In early October NYDIS received up to $1 million of funding from the Red Cross. Though the costs of hotel rooms vary, they generally range from $100 to $250 per night. By NYDIS’s estimation, it has enough funding to continue running the program through mid-late November.

That limited funding coupled with the number of remaining evacuees means any discovery of fraud, even on a small scale, is critical to the program’s continued success.

In the 11 months that the hotel program was managed by the city through DHS, the state Attorney General’s Office discovered only one case of alleged fraud. The attorney general said that Caterina M. Curatolo defrauded the city, the federal government, and the Red Cross for assistance to the tune of $87,000.

The Red Cross declined to comment at the time of publication, and FEMA, DHS, and the Manhattan District Attorney’s Office did not return calls for comment.