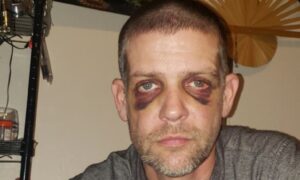 Portland Assault Victim Believes He Was Attacked For Being White
0 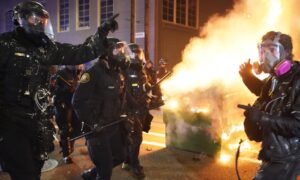 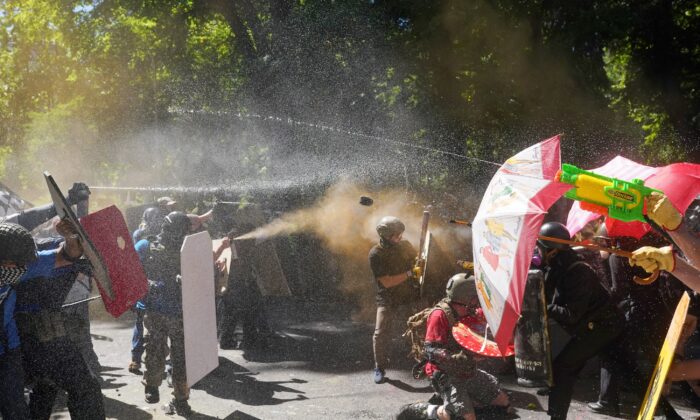 Pro-police demonstrators and others, left, and counter-protesters, fire pepper spray and hurl objects at each other in front of the Multnomah County Justice Center in Portland, Ore., on Aug. 22, 2020. (Nathan Howard/Getty Images)
US News

Groups Clash in Downtown Portland, No Arrests Made

Demonstrators and counter-demonstrators clashed in Portland on Aug. 22, spraying each other with pepper spray and repeatedly engaging in physical fights. No arrests were made.

Video footage and photographs show a chaotic scene that played out in the early afternoon as people fired paintballs and brawled with weapons such as bats and shields.

At one point, a man appeared to pull out a gun but fired no shots.

The Portland Police Bureau (PPB) stated it identified the male suspect and is investigating, asking anyone who was a victim or an in-person witness to come forward.

The clashes were difficult to deal with because many officers had already worked into the early hours of the morning, policing a riot at the bureau’s North Precinct, the bureau stated. There, agitators assaulted police officers and severely damaged police cars and a Boys and Girls Club van, leaving one police officer with a laceration on her leg and another with a sprained ankle. Nine arrests were made.

Other officers were pulled away just after noon after receiving a report of a man who assaulted his mother with a saber. It was ultimately determined that the male had a “shaver,” not a “saber.” He was arrested.

“At one point during this call, there were only 4 available police cars in the entire City to respond to emergency calls for service,” the bureau stated in an incident summary, explaining why a riot wasn’t declared during the clashes downtown.

Shootings have spiked in Portland this year, and the city has been dealing with nearly three months of near-nightly unrest by Black Lives Matter activists and other demonstrators. More than 500 have been arrested, not including arrests made by federal officers outside the Mark O. Hatfield Courthouse.

President Donald Trump offered earlier on Aug. 22 to send the National Guard—an offer he’s made regularly. State and city officials haven’t responded to inquiries about how they plan to quell the unrest or whether they’ll eventually accept Trump’s offer.

Hundreds of people were involved in the clashes on Aug. 22. Many were armed. Additionally, the groups contained “individuals who appear to be willingly engaging in physical confrontations for short durations,” police stated.

The mayhem began dying down before 3 p.m., as federal police officers assisted local officers in dispersing the crowds.

“Crowd management events are complex, especially when they involve groups with differing ideologies with members who wish to engage in physical confrontations,” Police Chief Chuck Lovell said in a statement.

“PPB had to be judicious with our limited resources today especially since many of our members worked during the riot this morning and had very little sleep. Our resources are finite and we also have emergency calls for service to manage across the city. We are investigating criminal acts when we are aware of them and ask for any victims to come forward so we can build the best case we can for enhanced outcomes for prosecution.”

“Neither hate speech nor violence are welcome in Portland,” he said.