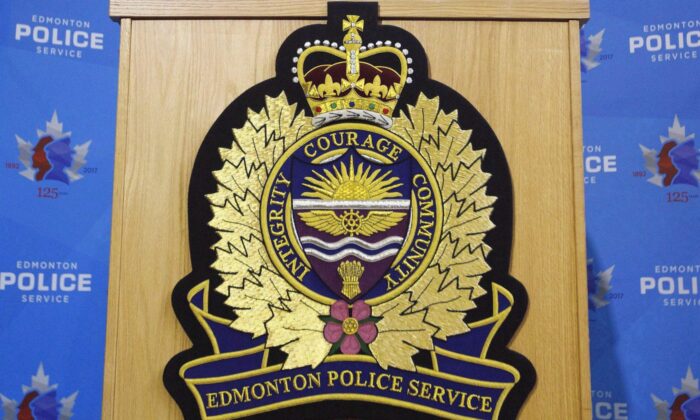 An Edmonton Police Service logo is shown on a lectern at a press conference in Edmonton, Oct. 2, 2017. (The Canadian Press/Jason Franson)
Canada

The Canadian Centre for Child Protection says it is seeing an alarming increase in reports of children being lured online as an American man accused of kidnapping a teenage girl from Edmonton was set to appear in court Tuesday.

The 13-year-old girl was missing more than a week before she was found in Oregon on Saturday.

Noah Madrano, 40, was arrested by FBI agents and is being held on rape, sexual abuse and kidnapping allegations.

There has been a 120 percent increase in reports of online child luring over the last six months, said Stephen Sauer, director of Cybertip.ca at the centre. Cybertip is Canada’s tip line for reporting online child sexual abuse.

“They are really looking at the vulnerability of the child and exploiting that,” Sauer said

About 50 percent of the reports are related to extortion, he said. People create fake social media accounts, contact children and ask them to share an intimate image or video. The user then threatens that they will share it with family, friends or the child’s school if they do not provide money or further images.

Sauer said situations where a person online meets up with the child is much more rare.

Edmonton police have said the girl was last seen arriving at her junior high school but she didn’t show up for class. She was reported missing June 24.

Police said it is believed the suspect came to Edmonton, but it’s not clear how she crossed the U.S. border.

“I don’t know how long they may have been in contact with one another. I do know that the reason we’re going with a child-luring charge at this point is that it’s one we can support because of some of the online history,” Edmonton police Insp. Brent Dahlseide said in a recent news conference.

Prevention is key to keeping kids safe online, Sauer said. Parents should talk with their children about what they do on social media and in chats. It doesn’t have to be a formal conversation, he added, just parents checking in with their children.

What could make a significant difference, Sauer said, is increased social media regulation, especially for platforms such as Snapchat and Instagram that young people use.

One in three internet users in the world is a child—one in five in Canada. Many countries are pressuring social media companies to ensure platforms are safe for that demographic.

Sauer said the companies themselves could take action immediately that would make online spaces safer for kids.

“There’s so much more the companies could be doing in this space.”