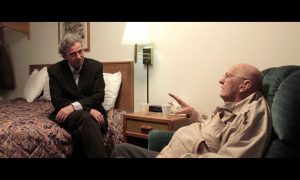 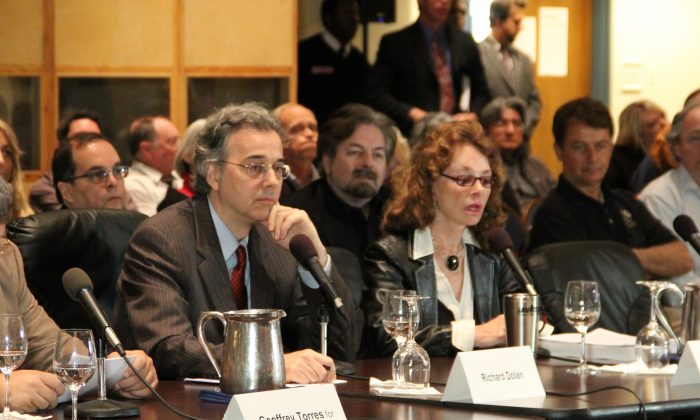 American historian Richard Dolan at the Civilian Hearing on Disclosure at the National Press Club in Washington May 3, 2013. Dolan said the government’s dismissal of information about extra terrestrial intelligence belies the thousands of documents it has released on incidences of unexplained and unidentified aerial craft around America. (Shar Adams/The Epoch Times)
Special - SCIENCE

WASHINGTON—After five days and 40 testimonies from international witnesses from the military, scientific and academic fields, a committee of six former Congress members agreed to seek international support to break a “truth embargo” on encounters with extraterrestrial life.

On May 3, the last day of the Citizen Hearing on Disclosure, (CHD) organizer Stephen Bassett read the contents of a communiqué signed by four of the six retired Congress members.

According to it, the Citizen Hearing Foundation will pursue a global campaign to form a world conference dedicated to discovering the truth behind “overwhelming scientific evidence” that suggests a link between sightings of unexplained craft and extraterrestrial intelligence.

“Given the enormous global implications, if these craft are indeed of extraterrestrial origins, such an issue is a matter for the General Assembly for the United Nations,” Bassett read.

The hearing, funded by Canadian philanthropist Thomas Clearwater, is to be made into a documentary by Just Cause Entertainment and titled “Truth Embargo.”

After hearing their stories, former Michigan Rep. Carolyn Kilpatrick said she was convinced “There is something out there.”

“The military witnesses spoke of incidences from 30, 40, 50 years ago and have remained silent during this time. They have come out of retirement with compelling information that would have us look further into these phenomena,” she said.

The first African-American woman to sit on a House defense committee and the first to agree to participate in the CHD hearings, Kilpatrick said: “This is an international phenomena and the U.S. and other countries need to acknowledge that there is other life.”

Former Alaska Sen. Mike Gravel said the reported shutdown of U.S. missiles was the “smoking gun of the whole issue.”

“Defense is spending billions of dollars on something that is vulnerable,” he said.

Gravel, who served in the Senate from 1969 to 1981, tried to end the draft during the Vietnam War, and is remembered for reading the Pentagon Papers into the congressional record in 1971, for which he nearly lost his position.

Gravel questioned the ability of Congress to do anything on the issue and pointed to the international witnesses at the hearing, which included representatives from Canada, Chile, Argentina, England, Brazil, Italy, China, Peru, and Uruguay.

“There’s no reason why … we wouldn’t try to, within our own communities, to get them to endorse a very simple, straightforward resolution, calling upon the [U.N.] General Assembly,” he said.

He described documents he had obtained from the Canadian government: “They admit that document is legitimate. It says flying saucers are real … and the U.S. knows,” he told the hearing.

Cameron was motivated to research the issue in 1975 after witnessing and photographing UFOs over a period of months in Manitoba, not far from the Canada–U.S. border.

While a number of international witnesses described their governments’ open approach to UFO sightings, particularly in Latin America, Cameron noted that the United States had defined a policy of secrecy on the issue over many years.

Cameron said officials from other countries had told him they would be open about UFOs as soon as America led the way.

Richard Dolan, one of the most respected authorities on the study of UFOs, believes there is a “truth embargo” in American government about the issue.

“One of the things that has struck me is the discrepancy between the massive amounts of documentary evidence that we have on the one hand, and the near complete absence of official acknowledgment of the reality on the other,” he said.

While he notes that none of the thousands of official documents released represent definitive evidence of national security or intelligence engagement with extraterrestrial life, “accumulatively … we are obligated to ask why are they so interested.”

In one of the most gripping testimonials of the hearing, Dolan is seen on video interviewing an ailing former member of the Central Intelligence Agency (CIA). Nearing the end of his life, it was the first time the anonymous official had dared to talk publicly. In the 15 minute video he speaks about witnessing extraterrestrials, their craft and the secrecy surrounding the issue.

Former members of Congress, California’s Lynn Woolsey and Maryland’s Roscoe Bartlett, did not sign the CHD statement because they had not been out of Congress for over a year, having lost their seats in the 2012 election.

Woolsey said she initially approached the hearing with some trepidation, fearing ridicule, but chose to participate because it was the “perfect vehicle” to examine “openness and transparency” in government.

After hearing the witnesses, Woolsey said: “Anybody that ridicules this effort, they are the ones that are out of step.”

Woolsey referred to testimonies from former defense personnel who had been unable to talk about UFO related events or even seek medical support for decades because of the secrecy surrounding the issue.

“I had no idea how badly everybody had been treated,” she said.

Roscoe Bartlett said the totality of evidence presented was “very difficult to argue away.”

He said that officials who made the decision to keep the reported encounters secret many years ago must have thought they were doing the best for the American people but he believed that was no longer the case.

“I am very concerned that a government that can so easily ignore the Constitution to do what they think are good things today, can ignore [it] to do the bad things tomorrow,” he said.

In an interview near the end of the event Bartlett asked, “How do we treat the disease if we don’t know the source?”