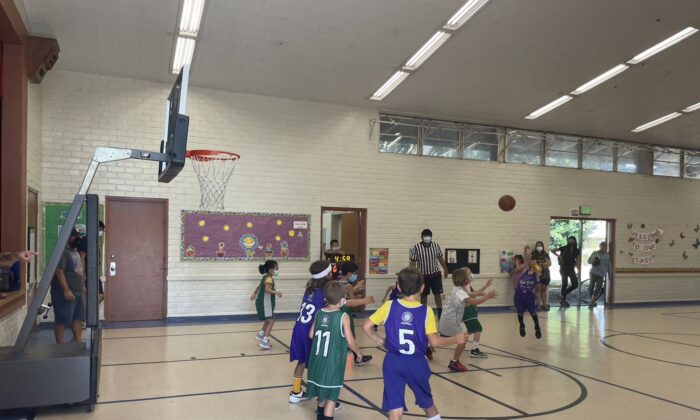 Children are playing basketball with masks at the Mar Vista Recreation Center in Los Angeles on Aug. 20, 2022. (Courtesy of Ross Novie)
Southern California

“I only learned of this last week about how, with all of the elimination of mandates, that somehow one of the last vestiges was LA parks,” Novie told The Epoch Times.

The city’s Department of Recreation and Parks continues to mandate indoor masking and proof of COVID-19 vaccinations for its parks, sports facilities, and recreation centers after the requirement was dropped by public schools, entertainment venues, and workplaces.

“Now we’re just stuck with tens of thousands of kids playing sports inside with masks, even though at [the city’s K–12 schools], they’re not,” Novie said. “It makes no sense. I feel like people are just asleep at the wheel, and as usual, no one cares about the kids.”

The Los Angeles Unified School District—the second largest school district in the United States—scaled back its mask requirement as instruction resumed Aug. 15. Masks are now strongly recommended but not required, and the vaccine mandate was put on hold for another year.

Novie said he reached out to Mayor Eric Garcetti’s office and some city councilors but hasn’t heard back from them.

Although the Los Angeles County Department of Public Health now allows businesses to remove indoor mask mandates and modify their vaccination status requirements, the city does not yet conform to that, according to the recreation department.

“Current LA city guidelines and the most recent city health mandate requires masking at all indoor facilities and requires the city to check proof of vaccination as a condition of entry,” a department statement read.

Earlier this year, LA Uprising collected signatures calling for the termination of the county Public Health Director Barbara Ferrer for imposing some of the harshest restrictions in the country.

Requests for comment from the mayor’s office and the Los Angeles County Department of Public Health were not immediately returned.