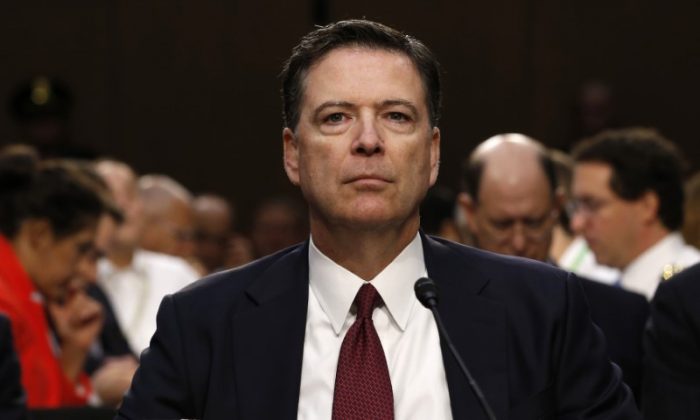 WASHINGTON—Former FBI Director James Comey was fired in May 2017 just a few hours after the bureau’s top leadership drafted a letter to Congress that “muddled” his congressional testimony the week before.

Comey was terminated by President Donald Trump on May 9, 2017, the same day the Senate Judiciary Committee received the letter concerning Comey’s May 3, 2017, testimony claiming that Abedin made a “regular practice” of forwarding “hundreds and thousands” of emails from the Clinton system to her husband’s laptop computer.

Abedin’s husband is former Rep. Anthony Weiner (D-N.Y.), who the same month in 2017 pleaded guilty to sending obscene photos to a minor. He was released from prison earlier this year.

“Director Comey spoke of hundreds and thousands of emails being forwarded from Ms. Abedin to Mr. Weiner’s laptop computer,” FBI Assistant Director Gregory Brower wrote in the letter to the committee.

Brower said 49,000 emails were forwarded, but only “a small number were a result of manual forwarding” to Weiner by Abedin. A dozen of the emails contained classified government information, he said.

Trump fired Comey for making “serious mistakes” in the FBI investigation of Clinton’s use of the unsecured private email server instead of a government system to conduct official U.S. diplomatic business from 2009 to 2013, according to the Department of Justice (DOJ).

“After a flurry of emails, by 8:56 a.m. Comey’s chief of staff, Jim Rybicki, sent the group a draft letter for Congress, saying, ‘Below is a draft that has been reviewed by the Director. Please let me know your thoughts,’” Judicial Watch said in releasing the document.

“At 2:02 PM, Asst. Director for Congressional Affairs, Greg Brower, asked his colleagues to review the latest iteration of the draft letter to the Senate,” Judicial Watch continued. The final version of the letter was sent shortly thereafter.

The emails were among 13,000 pages of records ordered to be released to the watchdog group by U.S. District Judge Reggie B. Walton, in a lawsuit filed after the DOJ failed to respond to a Dec. 4, 2017, Freedom of Information Act request.

Schmidt provided Kortan with multiple details about an upcoming story written by three of his newsroom colleagues, but he asked no questions of the FBI executive.

And an April 10, 2017, email from Page to top FBI colleagues described an advance look at an upcoming story given to them by The New York Times.

Lisa Page: “Are you serious, dude? I sent to [redacted]. So I’ve committed some grave sin for not including you on this? My apologies, DAD Strzok, sir.”

Peter Strzok: “You know what? Take a step back and look at this… And stop with the DAD Sir bullsh*t. That is not the point and you know it.”

Judicial Watch President Tom Fitton said, “These new Page-Strzok emails show the Obama FBI to be a mess both professionally and ethically.”