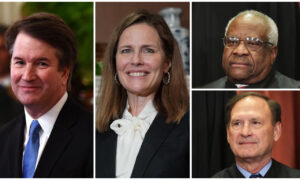 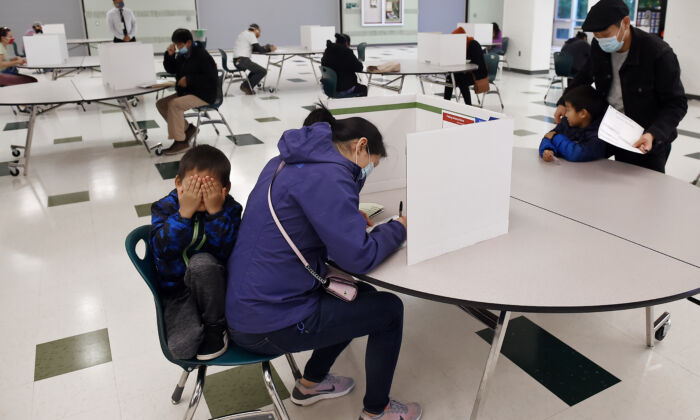 Voters cast their ballots at a polling station on election day in Arlington, Va., on Nov. 3, 2020. (OLIVIER DOULIERY/AFP via Getty Images)
Legal Cases

The Virginia Project, a Republican political action committee set up in 2019 after a devastating election whitewash in the state legislature, started conducting data analyses after the Nov. 3 election.

“The whole thing stunk to high heaven,” David Gordon, the group’s founder and director, told The Epoch Times on Nov. 27. “It became clear that we needed to audit this, because it’s a mess, top to bottom.”

But, he said, Virginia’s electors aren’t going to determine the presidential race, so his focus is on the congressional seats. He hopes to complete the data analysis, collect affidavits from voters and poll watchers, and file a lawsuit before the end of the year.

“The primary things that we need to look at are the voter rolls, the machines, and what exactly went down in those central absentee precincts,” Gordon said. Virginia used 11 central precincts to count its early and absentee ballots, which accounted for a “beyond unprecedented” 64 percent of the total votes, Gordon said.

Gordon alleges that all 11 centers had problems with accountability and reporting, and all will show problems during the investigation. The group is currently collecting as much granular data as possible to enable them to look at what happened on a local precinct level.

Richard Anderson, chairman of the Republican Party of Virginia, submitted a letter to the state Department of Elections to request that the results certification, scheduled for Nov. 16, be postponed (it wasn’t).

“Election night reporting was nothing less than chaotic and has led many Virginians to distrust the results—and with good reason,” Anderson wrote.

“Those central absentee precincts results weren’t broken down by the different types of early votes—in person, by mail, or at the much-maligned drop-off locations. Because of this aggregation of votes in the Central Absentee Precincts, we can not even discern whether a particular precinct may have had more than 100 percent of its registered voters cast ballots.”

Judicial Watch identified in October that Virginia rolls include 233,540 inactive voters. Many of the more populous cities and counties had a registration rate higher than that of the voting-age population.

The Senate race in Virginia hewed closely to the presidential race, with The Associated Press calling incumbent Democratic Sen. Mark Warner the winner over his Republican challenger, Daniel Gade, just minutes after the polls closed on Nov. 3.

Gade surged ahead of Warner on election night by hundreds of thousands of votes and hit back at the early call with a video saying he will “concede nothing” until the results are conclusive.

However, on Nov. 4, after a deluge of votes came in for Warner overnight, Gade conceded. A Senate seat pick-up for Republicans would be the tipping point in the balance of power, depending upon what happens in Georgia with two seats up for grabs on a Jan. 5 runoff.

Warner won the seat by a resounding 451,138 votes, but Gordon says, “If the scale of things is as we think it may be, then the Senate race, it could be overturned.”

The five congressional races that the Virginia Project is investigating include the 2nd, 3rd, 4th, 7th, and 10th districts. A five-seat swing would put Republicans within one seat of a majority in the House, after they gained 11 seats so far. Virginia has 11 congressional seats.

“My hypothesis is that the Republicans definitely won the 7th District,” Gordon said. “I believe what happened in the 10th District and the 4th District really bears very close inspection, as well as a lot of things in the 3rd District. And the 2nd District was close enough that any evidence of large-scale fraud would likely overturn the result in that district also.”

The vote differentials in the House races being scrutinized by the Virginia Project are as follows, with Democrats having been declared the winners in all:

Spanberger took the lead from Freitas on Nov. 4 after a memory stick containing 14,616 previously uncounted votes was found. Henrico County Registrar Mark Coakley told local media outlets that he had reused the memory stick and the machine failed to read the 14,616 absentee ballots because it was programmed for provisional ballots.

Gordon, who has a 30-year background in big data, has posted a group of charts on the Virginia Project’s website that he says show statistical impossibilities.

The charts show two large continuous chunks of votes coming in for Trump early on election night. Later, two large chunks can be seen for Biden, the latter one at a higher ratio.

The two Biden chunks seem to be “the Rosetta Stone of the whole issue,” Gordon said. “I think Virginia ended up voting more Trump than they ever anticipated. And that the initial attempt to stuff the ballots failed.”

He alleges that extra votes for Biden were artificially added to make up the deficit. However, critics say that the huge Biden dumps can be put down to Democrats voting overwhelmingly by mail this year, and those votes were counted later.

Gordon expects to publish more findings in the next 10 days.

The Virginia Project has received more than 250 statements from voters and poll watchers in the state who experienced irregularities during the election, Gordon said. He’s expecting that some will be converted into affidavits and filed with a lawsuit.

“Anything you can imagine, whether it be via malfeasance or incompetence, we’ve received reports of it,” he said.

“Election Day irregularities, people being told that they voted absentee when they hadn’t, unusual behavior by people at the polls, machines that mysteriously stopped working, and … poll staff having people put their ballots into a box, no idea whether they were counted or not.”

He said the project has received “amazing overwhelming support” and that “people want this badly, very badly.”

The Democrat-controlled legislature in Virginia passed a slew of new election laws in 2019, of which many took effect on July 1.

The new laws include one allowing voters to use absentee voting without requiring an excuse, such as having a disability that would preclude them from getting to the polling booth. Absentee ballots can accepted up to three days after an election day, and residents can be placed on a permanent absentee list.

A photo identification is no longer required, and voters can now use a current utility bill, for example, to verify their name and address at the polling booth. The DMV has also moved from using an opt-in process to an opt-out one, meaning individuals getting a driver’s license will be automatically put on the voter rolls unless they specifically opt out.