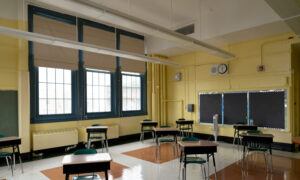 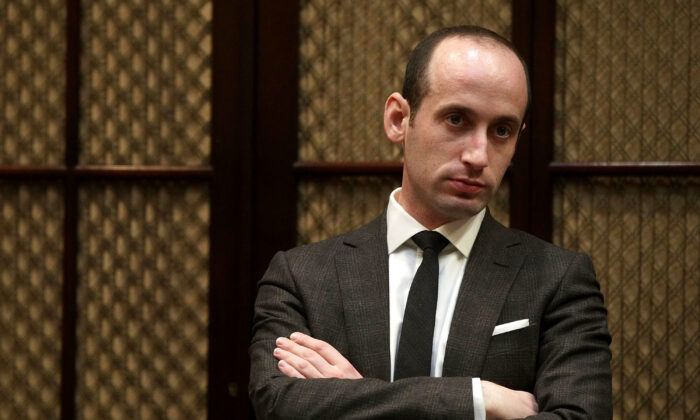 White House senior policy adviser Stephen Miller waits for the beginning of a parent-teacher conference listening session at the Roosevelt Room of the White House on Feb. 14, 2017. (Alex Wong/Getty Images)
US News

America First Legal (AFL), a group led by former Trump adviser Stephen Miller, has criticized a proposed grant priority by the Biden administration that seeks to promote controversial racial concepts in the classroom.

AFL submitted a formal comment to the U.S. Department of Education condemning its proposed rulemaking that would incentivize schools to teach the quasi-Marxist critical race theory to its students. The department recently announced the proposal, known as the “Proposed Priorities: American History and Civics Education,” which introduces two new priorities for grants.

The AFL letter disputes the proposed outcomes of the priority and instead argues that the proposal is “inconsistent and irreconcilable with who we are as Americans.” The group says the priority promotes a divisive view of history, encourages an “unbalanced and politically motivated approach” to teaching the facts of history, advances a false narrative that America was built through a structurally oppressive society, and that the proposed teaching approach presents a demagogic reading of history.

“Because the proposal is insidiously harmful for students who are learning history, deeply damaging to civic culture, corrosive of national unity, profoundly detrimental to the growth of knowledge and the open pursuit of academic inquiry, violative of our foundational principles, factually unsalvageable as matter of historical truth, and destructive to national unity, AFL urges the Department of Education to reject this priority as written,” the letter states (pdf).

AFL argues that adopting critical race theory would deprive students of an accurate history education and instead push an “ideological commitment” as fact.

Critical race theory redefines America’s history by claiming that the nation was built through struggle between “oppressors” (white people) and the “oppressed” (everybody else), similarly to Marxism’s reduction of human history to a struggle between the “bourgeoisie” and the “proletariat.”

Critical race theory has been heavily promulgated throughout academia, entertainment, government, schools, and corporations in recent years and rose to new prominence following the rise of far-left groups such as Antifa and Black Lives Matter.

A number of Republican-led states have initiated a campaign to prevent the teaching of the doctrine in classrooms and in employee training.

AFL also says it intends to “take all appropriate action” in the event the department adopts the proposed priority.

The group has previously said that it’s pursuing a lawsuit to target critical race theory training in the federal government. It has also filed a lawsuit seeking to block the implementation of a farm subsidy program that overtly excludes white farmers.

The U.S. Department of Education didn’t immediately respond to a request by The Epoch Times for comment.