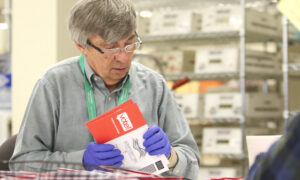 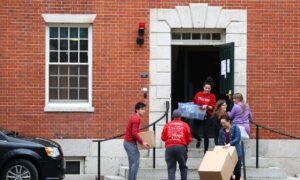 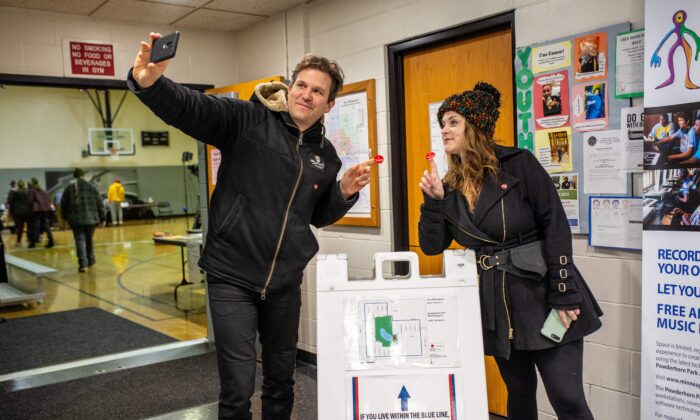 A couple takes a "selfie" photo after voting at the Democratic presidential primary at Powderhorn Park Community Center in in Minneapolis, Minn., on Super Tuesday, March 3, 2020. (Kerem Yucel/AFP via Getty Images)
Judiciary

An electoral integrity group that claims tens of thousands have voted illegally in Minnesota is awaiting a state Supreme Court decision in its lawsuit aimed at forcing Minnesota Secretary of State Steve Simon to release public data from the statewide election database.

“I think it’s quite obvious he doesn’t want the public to become aware of how poorly our elections are being run,” Andy Cilek, executive director of the Minnesota Voters Alliance (MVA), told The Epoch Times in an interview.

The wheels of justice turn as both parties keep a close eye on Minnesota, traditionally a stronghold for Democrats.

President Donald Trump, a Republican, came a lot closer to victory in deep-blue Minnesota in 2016 than almost all election handicappers thought possible, losing to Democrat Hillary Clinton by just 1.5 percentage points, or 44,765 votes, out of close to 3 million ballots cast. By contrast, in 2012, incumbent Democrat Barack Obama beat Republican Mitt Romney by a solid 7.7 percentage points, or 225,942 votes, out of more than 2.9 million ballots cast.

The case, Cilek v. Minnesota Secretary of State, is currently under consideration by the Minnesota Supreme Court, which may render a decision within days. Oral arguments took place Oct. 5, 2019.

The Minnesota Voters Alliance sued Simon, a Democrat who took office in 2015, in 2017 after Simon’s office refused access to non-private government data in the Statewide Voter Registration System, a centralized voter registration database used by the secretary of state and election officials to administer elections in the state. The database contains information on registered voters and previously registered voters.

Claiming the database identified many individuals who were ineligible to vote actually cast ballots, the MVA’s suit sought access to complete election records in order to identify what went wrong.

Cilek told The Epoch Times that his group’s analysis of limited amounts of publicly available data revealed that there were “tens of thousands of voters who have failed eligibility checks after they voted.”

“It is hoped that having access to the full set of public election records will … better quantify the amount of potential ineligible voting, specifying the failures of election officials to identify and prevent it.”

The Ramsey County District Court found that Simon’s office provided most of the information requested by making available the “current statewide public information list.” But the secretary failed to hand over data of keen interest to the MVA, particularly with respect to voter status—whether active, inactive, deleted, challenged—and regarding reasons for voter challenges, along with “registration, status and voting history information on every Minnesota voter … active, inactive or deleted.”

The trial court ruled against Simon, holding that state law “presumes government data, including data at issue in this case, [are] public and [the secretary of state] failed to set forth a federal law, state statute or a temporary classification of data that provides that the data requested by [the MVA] [are] not public.”

Simon appealed to the Minnesota Court of Appeals, which in April 2019 also ruled against him. That court concluded “that the data requested by respondents, and not produced by appellants, are public data.”

Allegations of voter fraud are nothing new to Minnesota.

The most famous example from recent times comes from 2008 when Democrat challenger Al Franken initially appeared to lose a hotly contested U.S. Senate race to Republican incumbent Norm Coleman by 725 votes. But Franken refused to concede, and the thin margin triggered an automatic recount.

By April 2009, after a controversial recount process replete with irregularities, Franken eventually prevailed with a 312-vote margin of victory. There were many allegations of voter fraud, including a report by watchdog group Minnesota Majority that found that about 1,100 convicted felons voted unlawfully.

Franken resigned from the Senate on Jan. 2, 2018, after allegations of sexual misconduct were raised against him.