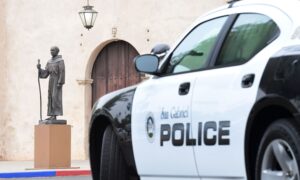 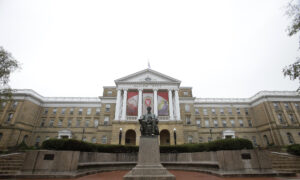 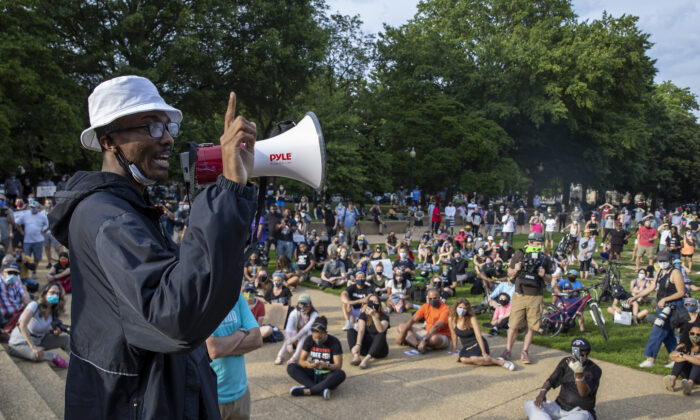 Glenn Foster, an activist seeking to tear down the Emancipation Statue, speaks near the memorial in Washington on June 26, 2020. (Tasos Katopodis/Getty Images)
US News

Group Fails to Take Down Emancipation Statue Before Attacking Reporters

The attempt to tear down the Emancipation Statue in Washington ended in failure Friday night as some of those convened attacked reporters.

A group called Freedom Neighborhood organized a gathering that was supposed to end in the statue—featuring former President Abraham Lincoln and a freed slave and paid for by freed slaves—on the ground.

Strong barriers were placed around the memorial on Thursday afternoon.

At one point, Harvard University student Glenn Foster, who organized the rally, shouted: “We’re going to tear that [expletive] down!”

A petition launched by another local activist says the Emancipation Statue should be taken down because it memorializes “the intended subservience of black people in this country.”

The group faced opposition, including from Cedric Turner, who described himself as descendant of the black man depicted in the memorial, and Don Folden, a tour guide in the capitol.

“A lot of people out here are talking about tearing down something that they don’t even know the history of,” Folden told the crowd.

The situation devolved when part of the group, primarily individuals dressed like members of Antifa’s black bloc, attacked reporters, including the Daily Caller’s Vincent Shkreli and One America News Network’s Jack Posobiec.

Posobiec said on social media that he filed a police report. Video footage showed him being assaulted while filming the rally.

Protesters later marched away from the statue and blocked traffic as they walked through city streets.

“We showed the world that we can get change peacefully,” Aaron Covington, an organizer of the group, told one reporter. “This isn’t about us. This is about what God wants to have happen. He wants us to have our change.”

The success at preventing the Emancipation Statue from being torn down comes amid efforts from the Trump administration to protect monuments.

President Donald Trump announced late Friday that he signed an executive order promised earlier in the week that says the federal government will prosecute “to the fullest extent under the law” anyone who incites violence and illegal activity, which includes the damaging of monuments, memorials, or statues.

“President Trump will not tolerate the rampant violence and destruction that has occurred over the last five weeks,” a White House statement announcing the executive order reads.

“We have evidence that anti-government violent extremists—including those who support the ‘Boogaloo,’ those who self-identify as Antifa, and others—will pose continuing threats of lawlessness,” Barr said in a memo to high-level Department of Justice officials.

Some of the extremists may be fortified by foreign entities, he added, writing, “The Department of Justice will respond to these violent groups in the same way we respond to other organized criminal or terrorist networks—by disrupting their violent activities and ultimately dismantling their capability to threaten the rule of law.”