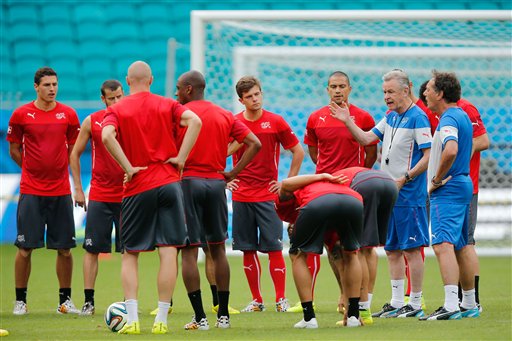 Group E in the 2014 World Cup has finished the group play and France and Switzerland will advance to the Round of 16.

Ecuador had a draw with France, 0-0, but didn’t advance because Switzerland beat Honduras.

Honduras lost all three of its games.

France will play Nigeria on June 30 while Switzerland will play Argentina a day later.

The standings before the games on Wednesday. (FIFA)

The standings after the games on Wednesday. (FIFA)

MANAUS, Brazil—Exactly four years after their last World Cup meeting, Switzerland and Honduras will face each other under almost identical circumstances.

Another draw could lead to the same consequence, depending on what happens in the other Group E match between Ecuador and France.

The Swiss are the seeded team in the group, but they followed up a 2-1 comeback win over Ecuador with a demoralizing 5-2 loss to the French. Honduras, like four years ago, has lost both of its opening matches.

The next meeting between the two will take place in the heat and humidity of the Brazilian rainforest at the Arena da Amazonia.

“Everything is in our hands,” Switzerland coach Ottmar Hitzfeld said. “We still have a good chance of qualifying.”

The 65-year-old German plans to end his career after this World Cup, but he came into the tournament expecting to stay longer than the three guaranteed group matches.

Hitzfeld, a two-time Champions League winner as a coach, has led Switzerland for six years, rebuilding it from a low point three years ago when the team failed to qualify for the 2012 European Championship.

The team he brought to Brazil had lost only once in 18 matches over the past two years before the rout by France.

“It was a bleak day for us,” Hitzfeld said. “We were not able to show our true potential.”

Against Honduras, the Swiss will be without Steve von Bergen. The central defender broke a bone in his face and will miss the rest of the tournament.

Honduras will head into the match on a bit of a high. Despite losing to both France and Ecuador, Carlo Costly scored a goal against the Ecuadoreans, something the Central American team hadn’t done at a World Cup since 1982.

“I was so happy when I scored that goal, because 32 years is a long time and a difficult barrier to overcome,” Costly told FIFA.com. “That myth, that curse which has been hanging over us for so long, has been laid to rest now.”

Switzerland could advance with a draw if France beats Ecuador. But Honduras needs a win combined with a France victory to have any chance of advancement.

“We know it’ll be a very tough match against the Swiss because we know their game well,” Costly said. “We’re still hopeful and we’ve got faith that everything will turn out well. That’s what we’re clinging on to.”