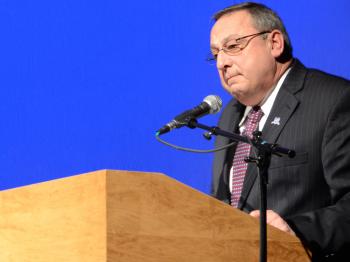 Governor Paul LePage at an event honoring the Maine National Guard at the Collins Center at the University of Maine on Jan. 7, 2011. Governor LePage had a mural depicting union workers removed from a public building. (Wikimedia Commons)
US

The mural chronicles events in Maine’s labor movement in a 36-foot long, 11-panel work, which includes pieces such as “The Secret Ballot” depicting the first time that workers were allowed to vote anonymously.

“We are aghast at the message of censorship that this action conveys. Removing this artwork is an attempt to erase the significance of Frances Perkins and the heroic struggles of Maine workers,” said Barbara Burt, executive director of the Frances Perkins Center, in a press release.

Frances Perkins was the first woman appointed to the U.S. Cabinet and served as the Secretary of Labor from 1933 to 1945, establishing unprecedented employment benefits and pensions for Americans.

Curiously, a book Perkins wrote will be reissued this year. “The Roosevelt I Knew” describes the process the Roosevelt administration went through as it decided to include the Arts in the Works Progress Administration. The federal art project created jobs for more than 5,000 artists during the Great Depression. Some of the projects were murals in government building like the one LePage just removed.

The Maine Department of Labor commissioned Judy Taylor to paint the mural in 2008. Tax dollars paid for it.

LePage ordered the removal of the painting over the weekend; surprising many with what the Perkins Center called this “secret removal.” According to the center, he decided to remove the mural after a businessman faxed an anonymous complaint about it to his office.

LePage is the eldest son of 18 children who come from an “impoverished and dysfunctional family,” according to LePage’s website. At age 11, LePage left home and lived on the streets, making a living shining shoes. A family took him in and got him a job washing dishes.

Slowly working his way up through various positions at different companies, LePage was able to attend college and earn a degree in business, becoming a successful businessman.The removal of the painting in such an unexpected way has people wondering whether it is safe. Tomlin Perkins Coggeshall, grandson of Florence Perkins, asked in a news release, “Was the artwork properly removed? Is it in a safe place, suitable for the storage of art?”