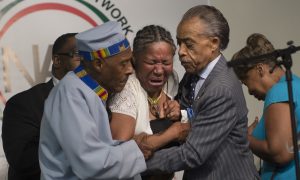 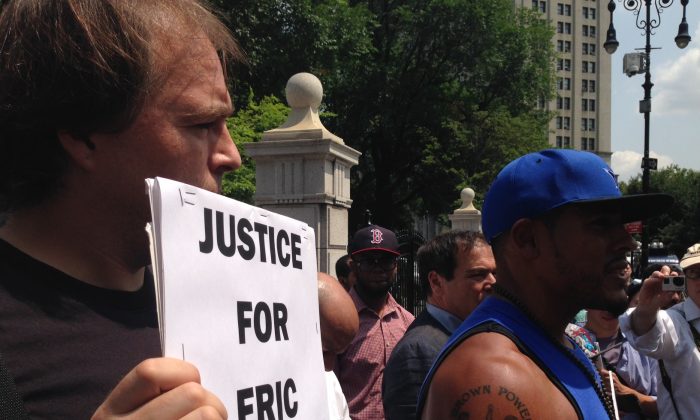 Josmar Trujillo (R), an organizer for New Yorkers Against Bratton, speaks to the press outside the City Hall in New York on July 21, 2014. (Ivan Pentchoukov/Epoch Times)
New York

NEW YORK—A group of activists called on Police Commissioner William Bratton to resign in the wake of a police chokehold death of Eric Garner on Staten Island on Thursday.

New Yorkers Against Bratton believe Mayor Bill de Blasio should fire the commissioner for failing to control his officers. Chokeholds are banned from use by police officers, but complaints about officers using the potentially deadly move have remained steady, totaling to over 1,000 over the past five years, according to data from the Civilian Complaint Review Board.

Eric Garner, a 43-year-old black man, was placed in a chokehold and brought to the ground as officers arrested him for illegally selling untaxed cigarettes. Both Bratton and de Blasio have said the video of the incident shows that Garner appeared to be in a chokehold.

New Yorkers Against Brattonwas formed in December last year in response to de Blasio’s appointment of Bratton. Josmar Trujillo, an organizer with the group, also called for an end of the “broken windows” policing strategy, and a federal investigation into New York Police Department’s “systemic culture of brutality.”

Bratton has backed the “broken windows” policing approach for years. The strategy focuses on low level crimes like panhandling and dancing on the subways as a means to prevent higher level crimes from occurring. Proponents of “broken windows” argue that the cleaner streets and subways which result from the approach create an clean atmosphere in which people are less likely to commit more serious crimes.

“It’s a policy and a theory that is broken,” Trujillo said. “It criminalizes thousands and thousands of New Yorkers.”

According to Alex Vitale a sociologist at Brooklyn College, there is little evidence that “broken windows” is solely responsible for the drop in crime.

“The crime drop is a national and international phenomenon. It’s been happening in cities that never used broken windows policing,” Vitale said.

New Yorkers Against Bratton believe that the removal of the police commissioner will set a precedent for all future commissioners that their job is on the line if their officers commit misconduct that leads death or other serious offenses.

“Commissioners, just like the CEO of a company, have to resign when there is a scandal. Commissioners need to pay the political price,” Trujillo said.

De Blasio supported Bratton at a press conference on Friday before leaving for a 10-day vacation in Italy.

“Commissioner Bratton and I are deeply committed to strengthening the relationship between community and police in New York City in all of our neighborhoods,” de Blasio said.

The group suggests that the appointment of the police commissioner be made more democratic, like having the commissioner be elected, and that control of the NYPD be handed to the community.