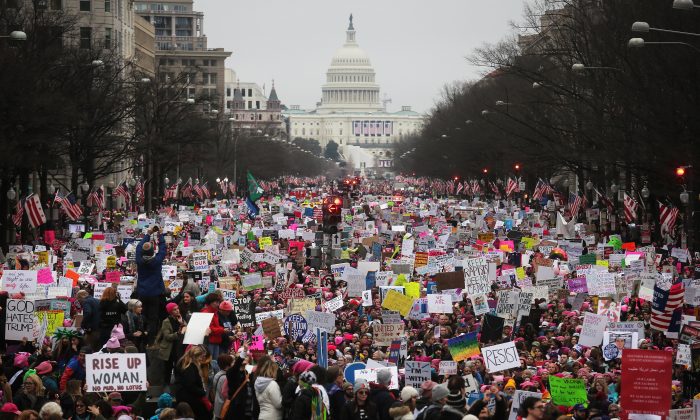 Protesters walk up Pennsylvania Avenue during the Women's March on Washington on Jan. 21. Large crowds are attending the anti-Trump rally a day after U.S. President Donald Trump was sworn in as the 45th U.S. president. (Mario Tama/Getty Images)
US

The group behind the Women’s March on Washington—which occurred on Jan. 21, the day after President Donald Trump’s inauguration—announced Monday that a strike is pending.

Without elaborating, the Twitter-verified Women’s March page wrote: “The will of the people will stand,” adding a photo of a banner titled, “General strike: a day without a woman.” The date, it added, will “be announced.”

The Jan. 21 march drew mixed reactions, with some saying it was a peaceful way to protest against Trump’s administration and his policies—while some pundits have criticized the march for being aimless and lacking clarity and purpose.

Pro-life groups said they were excluded, while pro-choice groups like Planned Parenthood and NARAL were included. Some also criticized the marchers for displaying crude messages and signaling, pointing out that using vulgarities to criticize Trump’s past comments is hypocritical and ultimately self-defeating.

The will of the people will stand. pic.twitter.com/SKJCRLhRKn

“Peaceful protests are a hallmark of our democracy. Even if I don’t always agree, I recognize the rights of people to express their views.”

Amid the march, an opinion article published by The New York Times said that billionaire investor George Soros had ties to more than 50 “partners” of the Women’s March, suggesting that it wasn’t as “grass roots” as it was claimed:

Soros ties with “Women’s March” organizations include the partisan MoveOn.org (which was fiercely pro-Clinton), the National Action Network (which has a former executive director lauded by Obama senior advisor Valerie Jarrett as “a leader of tomorrow” as a march co-chair and another official as “the head of logistics”). Other Soros grantees who are “partners” in the march are the American Civil Liberties Union, Center for Constitutional Rights, Amnesty International and Human Rights Watch. March organizers and the organizations identified here haven’t yet returned queries for comment.

Pro-Palestinian independence activist Linda Sarsour was also one of the march organizers, according to the conservative-leaning Daily Caller, which reported that she has ties with the Hamas terrorist group. Sarsour has promoted Sharia law—which has been widely criticized for restricting women’s rights—in prior tweets.

Following the election, it was revealed that 53 percent of white women voted for Trump.