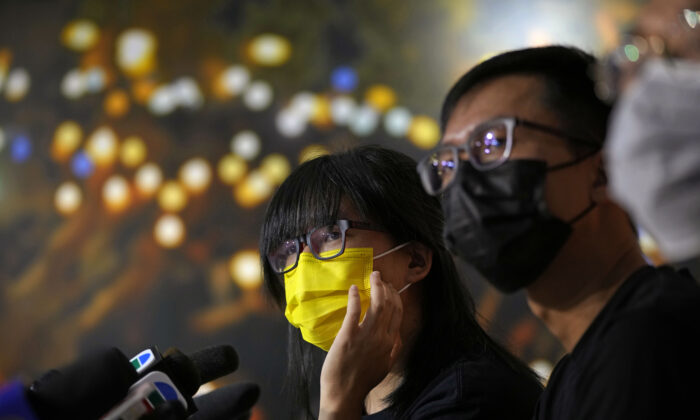 HONG KONG—The group behind the annual Tiananmen Square memorial vigil in Hong Kong said Sunday it will not cooperate with police conducting a national security investigation into the group’s activities, calling it an abuse of power.

Police notified the Hong Kong Alliance in Support of Patriotic Democratic Movements of China last month that it was under investigation for working for foreign interests, an accusation the group denied.

“This is a really bad precedent of the national security [police] abusing the power by arbitrarily labeling any civil organization as a foreign agent,” Chow Han Tung, vice chairwoman of the alliance, said at a news conference called to address the police investigation.

“The alliance strongly denies that we are any foreign agents,” Chow said. “We are an organization that was founded during the 1989 democratic movement, it was founded by the Hong Kong people.”

The investigation is part of a broad suppression of Hong Kong civil society following mass pro-democracy protests in 2019. Authorities have tightened control over the city with a sweeping national security law imposed by the Chinese Communist Party (CCP) that effectively criminalized opposition to the regime. The law and other changes have forced several civil organizations to disband or seen their leaders arrested.

The annual candlelight vigil honors the students who died when the military of the CCP violently suppressed massive pro-democracy protests in Beijing’s Tiananmen Square on June 4, 1989.

Authorities responded in the afternoon to the group’s announcement with a warning and reiterated they needed information about “certain foreign agents” although they did not name anyone specifically.

The city’s Security Bureau said in a statement that not handing over information could lead to fines or imprisonment.

Hong Kong had been the only place under the CCP’s control allowed to hold such a commemoration, and in past years, tens of thousands of people gathered in Victoria Park to honor the dead. Smaller crowds gathered this year and in 2020 despite police banning the vigil, citing coronavirus restrictions on public gatherings.

Police had asked the alliance to hand over any information about groups they had worked with overseas or in Taiwan, as well as contact information. They did not mention what specific incidents prompted the investigation.

Chow said the alliance has not been able to reach a consensus on whether to disband. It plans to hold a general meeting on Sept. 25 to discuss the matter again.

In August, the prominent Hong Kong Civil Human Rights Front, made up of a slew of member organizations, said it could no longer operate and chose to disband. The group organized large protests in 2019.

More than 100 pro-democracy activists have been arrested under Hong Kong’s national security law, which outlaws subversion, secession, terrorism, and foreign collusion to interfere in the city’s affairs. Many other activists have gone into exile abroad.

Critics say the law restricts freedoms Hong Kong was promised it could maintain for 50 years following the territory’s 1997 handover to the CCP from colonial Britain.